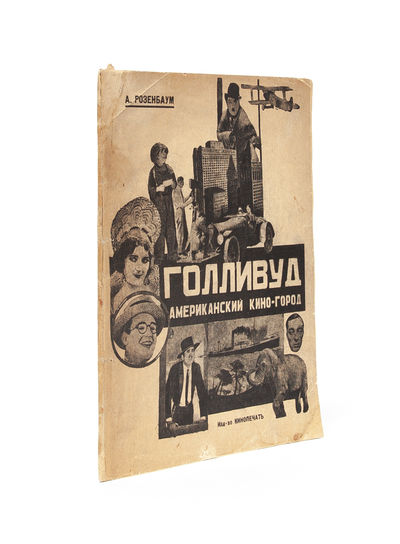 by Rand, Ayn
Moscow & Leningrad, 1926. First edition. Very Good +. Original pictorial wraps. 48 pages. Wraps with some light soiling; spine restored, pages gently toned throughout. Else, a tight and complete copy of this rare work, which last appeared at auction over a decade ago in 2008. Rand's second published work, Hollywood appeared in Russia during her youth. "Trapped in the totalitarian dictatorship of Soviet Russia, the young Ayn Rand found a lifeline in the form of foreign movies. In her late teens, she kept a journal in which she recorded each movie she saw, along with a list of the cast, the director, the date she saw the movie and a grade rating. She also studied writing for the screen, and two of her pieces were published in Russia in 1925 and 1926" (Federer). The second was the present work. "In Hollywood, one can see the very beginnings of the development of Ayn Rand's literary style" as she set the scene of Los Angeles and introduces Russian language readers to such icons as Cecil B. DeMille (Federer). A scarce and important foundation for Rand's later work. Very Good +. (Inventory #: 3466)
$6,500.00 add to cart or Buy Direct from
Whitmore Rare Books
Share this item

Richland, PA 1915
(click for more details about Handwritten suffrage speech from Pennsylvania's Justice Bell tour and the push for amendment ratification)
View all from this seller>