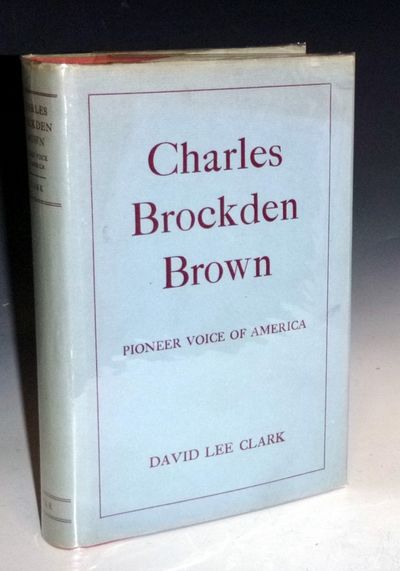 by Clarke, David Lee
Durham, NC: Duke University Press, 1952. First Edition. Octavo. Portrait frontispiece, 363pp., While Charles Brockden Brown was considered the father of the Gothic American novel, and one of the most important novelist before James Fenimore Cooper. He soon became interested in political, social, literary and religious ideas. Brown, born in 1771 had a deep concern where our new country was headed as can be seen in his essays, his political pamphlets, his works on the rights of women, his magazine articles and even his novels. The author writes of those influences Brown grew up around and to what extent these contending currents of thought shaped his life and personality, and how the national scene is reflected in the pages of his journals, private letters, magazines and novels. A very good copy bound in red cloth centrally stamped in gilt, spine lettering gilt but faded, some spots of fading to covers, in unclipped blue dust jacket lettered in brown, some toning to spine and upper edge, very light wear to spine ends. previous owner's name had been marked out. (Inventory #: 022462)
$55.00 add to cart or Buy Direct from
ALCUIN BOOKS, ABAA
Share this item