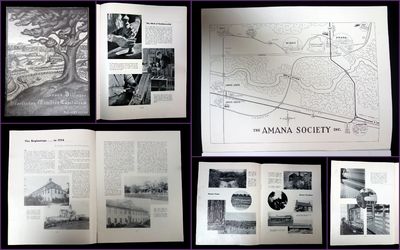 by Bertha M H Shambaugh
Amana, Iowa: The Amana Society, 1936. General wear. . This brochure shares a variety of historical and cultural material on the Amana Society, also know as the Amana Colonies, a grouping of seven villages located in Iowa near Iowa City. The booklet describes the government, customs, dress, religion, history, agriculture, and craftsmanship of the the Amana Society. Originally German immigrants fleeing religious persecution, they settled first in New York, and then in Amana in 1855. The seven villages comprise of 26,000 acres, and at the time of settlement, the society practiced a form of communism. In 1932, there was a shift in their society when it incorporated and began to practice a form of cooperative capitalism, for as the booklet states "voluntary communism can only be successful were a group is willing to make this sacrifice voluntarily and unselfishly in compliance with their religious faith or ideals, and that failure is inevitable where this altruistic cooperation is lost." Beyond the information on the society that the brochure provides, there is also an abundance of black and white printed photographs of the community, farmland, animals, people, and craftsmanship. The brochure was made using the "spirit and substance" of Bertha M H Shambaugh's two books on the Amana Society; "Amana: The Community of True Inspiration" and "Amana That was and Amana That This". The charcoal drawing used on the front cover of this brochure was made by Carl Flick, a member of the society, and it depicts a view of one of the villages, showcasing the farms and farmland. The Amana Society still exists today as the Amana Society, INC, and the villages themselves are listed as National Historical Landmarks. As such in addition to the specialized crafting and farming occupations that they are known for, they have also now become a tourist destination area known for its restaurants and craft shops. 16 pgs. Staple binding. OCLC 6 (Jan 2020) Measures 11" x 8 1/2" (Inventory #: 29022098)
$125.00 add to cart or Buy Direct from Eclectibles
Share this item