ACCOUNT OF THE RUSSIAN DISCOVERIES BETWEEN ASIA AND AMERICA, TO WHICH ARE ADDED, THE CONQUEST OF SIBERIA, AND THE HISTORY OF THE TRANSACTIONS AND COMMERCE BETWEEN RUSSIA AND CHINA 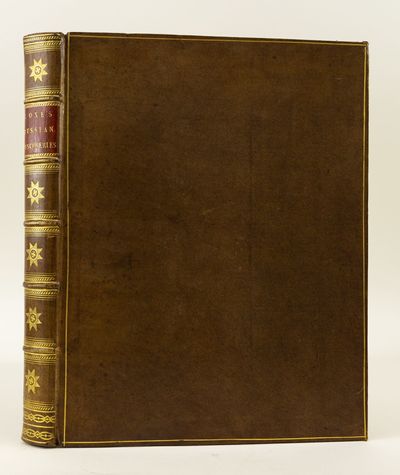 by (RUSSIA - EXPLORATION IN CHINA AND ALASKA). COXE, WILLIAM
London: Cadell and Davies, 1803. ONE OF 60 LARGE PAPER COPIES of the "considerably enlarged" Fourth Edition (ours a variant retaining the date of 1803 on the title-page, rather than 1804). 330 x 252 mm. (13 x 9 7/8"). xviii, [4], xix, [1], 380 pp. (Two leaves usually bound at the end and containing the "List of Principle Books Referred to in this Work" and "Works by the same Author" bound between pp. xvii and xix here). VERY FINE CONTEMPORARY SPRINKLED CALF, raised bands flanked by plain and decorative gilt rules and chain roll, spine panels with star centerpiece, red morocco label, marbled endpapers. With six engravings: five maps (two folding) and one view. A Large Paper Copy. Front pastedown with engraved armorial bookplate of Marcus Gage; title page with ink inscription at head: "M. Gage's Book, got from Mr. Asperne, London, April 15th, 1805." Lada-Mocarski 29 (note); Howes C-834; Sabin 17309; Streeter VI, 3501; Cordier, Bibliotheca Sinica, pp. 2447-48. Small chip to tail of spine, corners a bit rubbed, flyleaves somewhat foxed, the usual minor foxing to plates and a bit of offsetting to adjacent pages, otherwise A VERY FINE COPY OF AN ESPECIALLY DESIRABLE EDITION, clean and fresh internally with vast margins, and the binding firm, lustrous, and with only very minor wear to the joints. This is an extremely well-preserved copy in an elegant contemporary binding of the most sought-after edition of a key source on Russian exploration and that country's efforts to expand trade with China and Alaska. Eminent historian William Coxe (1747-1828) studied the voyages and exploration by Bering and others to the regions of Kamchatka, the Aleutian Islands, and Siberia to prepare this overview of the geography and cultures of the lands between Russia and North America, and to analyze the economic potential of trade--particularly in furs--with the region. According to Sabin, "Mr. Coxe's book contains many curious and important facts with respect to the various attempts of the Russians to open a communication to the New World." The 1780 first edition of this work covered Russian voyages of discovery between 1740 and 1769; the 1787 third edition added a supplement comparing these explorations to those of Captains Cook and Clerke. Our much-expanded fourth edition gives, in the words of the Preface, "a complete series of voyages from 1711 to 1792, comprising all that is known on the subject." Some of this supplementary information was gleaned from earlier accounts by German historians G. F. Muller and P. S. Pallas, and some from Coxe's own travels in Russia. According to Lada-Mocarski, Coxe "also succeeded in securing additional material: for instance, the narrative and maps of Krenitzin and Levashev's 'secret' expedition, the first official Russian government expedition since Bering's 2nd expedition of 1741. He was able to secure this particular information, not widely known at the time even in Russia, from Dr. Wm. Robertson, who in turn obtained it through his friend Dr. Rogerson, first physician to the Empress Catherine II. . . . In view of the above additions, one should consider the fourth edition of 1803 as the most desirable." He concludes: "Coxe's work, particularly the fourth edition, is a result of contemporary and authoritative sources translated into English, not to be overlooked by scholars and collectors alike." There are also distinct aesthetic advantages to the present Large Paper version over the octavo printing. Not only is the type beautifully re-set and laid out as well as surrounded by vast margins, but, as Streeter notes, there are two charts here that are not included in the octavo issue of 1803. The original owner of this volume, Marcus Gage, is known to have assembled a substantial library of beautifully cared-for books on travel and discovery (see, for example, "Exploration & Discovery, 1576-1939, Books from the Library of F[ranklin] Brooke-Hitching," passim). Gage notes that he got the book from "Mr. Asperne"-no doubt the London publisher and bookseller James Asperne (1757-1820). ABPC and RBH find just four other Large Paper copies at auction in the past 45 years, two of which had condition issues. One could wait a considerable time to find a copy as attractive and desirable as the present one. (Inventory #: ST15927)
$18,200.00 add to cart or Buy Direct from
Phillip J. Pirages Fine Books
Share this item