CASTRATED: My Eight Months in Prison 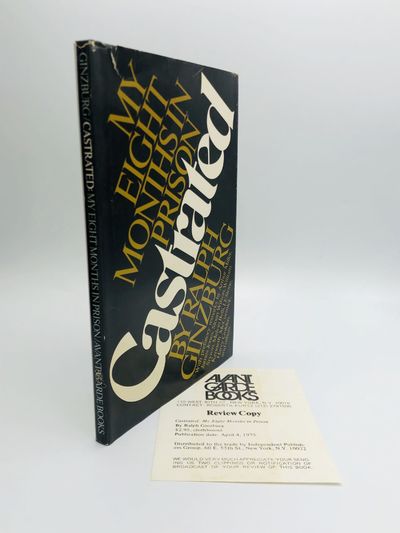 by Ginzburg, Ralph
New York: Avant Garde Books, 1973. First Edition. Hardcover. Very good/Very good. Review copy, with the publisher's slip and two promotional photographs laid in. Playboy was a three-year-old upstart when rival publisher Arnold Gingrich, impressed with his An Unhurried View of Erotica (1958), hired Ginzburg (1929-2006) as an editor at Esquire. "Playboy was a peanut whistle at that time, but it was a comer," recalled Ginzburg, "and they figured that the best way to get rid of the problem was to cut the sex out of Esquire, which, in effect, was self-castration. So that was the end of sex in Esquire; they just gace the field up to Playboy." Eighteen months later, Ginzburg was fired. He moved on to Eros, a high-priced magazine of classy erotica. Only four issues were published before he was indicted on charges of violating federal obscenity laws. Ginzburg was found guilty and sentenced to five years in prison (he was released after eight months). A number of First Amendment advocates protested the conviction, including Hefner: "The sustaining of Mr. Ginzburg's conviction by the Supreme Court is an anachronism and a true tragic abrogation of First Amendment freedoms. The true 'victim' in Mr. Ginzburg's case is, unfortunately, the Bill of Rights itself." Octavo. Original black cloth binding, with white and blind-stamped titles. Some light foxing along the extremities. The dust jacket is a trifle edgeworn; otherwise very good. (Inventory #: 70548)
$50.00 add to cart Available from Johnson
Share this item

DANCIN' DOWN ON THE SUNSET STRIP


(click for more details about DANCIN' DOWN ON THE SUNSET STRIP)