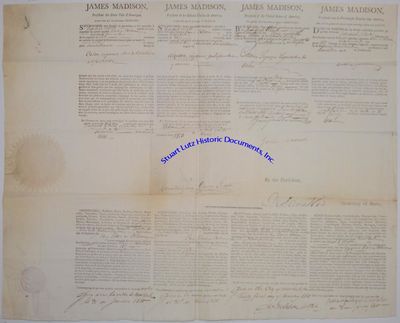 signed
by JAMES MADISON
JAMES MADISON (1751-1836). Madison was the Fourth President and “Father of the Constitution.” ROBERT SMITH (1757-1842). Smith was the sixth Secretary of State, serving from 1809 to 1811. DS. 1pg. 20” x 16”. March 20, 1810. New York. A four language ship’s paper signed “James Madison” as President and “R Smith” as Secretary of State. The document, printed in English, French, Spanish and Dutch, is for the brig Rose In Bloom from New York City. It was commanded by Jedediah Olcott, bound for Santillana, and laden with cotton, segars [sic], logwood and ashes. The large document is in very good condition with the usual folds, an intact seal, and a very large but slightly light James Madison autograph. There is a repaired tear in the upper left corner, and the overall condition is fine. (Inventory #: 4948)
$1,500.00 add to cart Available from
Stuart Lutz, Historic Documents, Inc.
Share this item

Gideon Welles Signed A Naval Document As Secretary Of The Navy