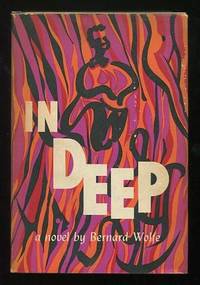 by Wolfe, Bernard
New York: Alfred A. Knopf. Near Fine in Very Good dj. 1957. First Edition. Hardcover. [light shelfwear, slight fading to boards along top edges, minor wear to cloth at spine ends; jacket spine tanned with a few little scrap marks, also browned along flap-folds, with a few additional scrape marks on front panel]. INSCRIBED ("for ______ -- from their / faithful admirer -- " and SIGNED by the author on the ffep. "A political action novel with a difference: it looks at the political world from below, through the cracks in the floor, examining the intensely public from the point of view of the intensely personal." The plot concerns a "non-political man" seeking revenge for the killing of a friend by the friend's political enemies, a quest which involves him with "a disquieting collection of hangers-on, including an amiable but shrewd procurer, a schizoid prostitute, a venomous bop-bongo drummer, an American sociology professor who fancies himself a folklorist, and several hard-core veterans of the Spanish civil war." The author led one of those really interesting and variegated lives that today seem like the stuff out of, well, a novel -- including eight months as secretary to Leon Trotsky in Mexico in 1937/38 -- later turning to writing magazine fiction, teleplays, and novels; notable among the latter is his 1963 Hollywood novel "Come On Out, Daddy." His 1972 autobiography was entitled "Memoirs of a Not Altogether Shy Pornographer." Signed by Author . (Inventory #: 25590)
$75.00 add to cart Available from ReadInk
Share this item
ReadInk
Offered by