The First Commercial Christmas Greeting Card, 1843. A Merry Christmas and A Happy New Year To You. 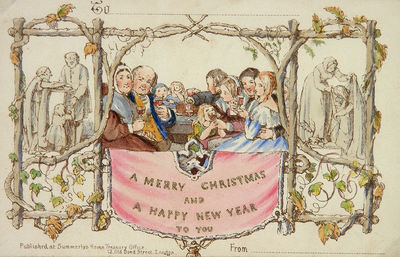 by (CHRISTMAS)
One of 1000 copies printed, it was sold for one shilling each, a hefty price at the time, the concept suggested by Sir Henry Cole who is best remembered as the intellectual designer of the Victoria & Albert Museum and responsible for the modern British postal system. However, because the central design depicted feasting and drinking (as designed by John Calcott Horsley), the card was attacked by the Temperance League and thought to promote drunkenness, so it was suppressed soon after publication and there are believed to be less than 30 examples thought to survive. The 2nd Christmas card did not get issued until three years later (in 1846).

The two side panels on the card illustrate images of the Christmas Spirit of giving alms to the poor, feeding and clothing the needy. Its release literarily coincided the same week with the publication of Dickens' A Christmas Carol and certainly helped perpetuate the celebration of the holiday.
Printed on one side, this is possibly a salesman's sample copy as an ink notation on the reverse side indicates the wholesale cost of buying multiples. It is also amongst the very best examples that survive. (Inventory #: BBO14)
$25,000.00 add to cart Available from Battledore
Share this item