Life of William Blake, "Pictor Ignotus".; With Selections from His Poems and Other Writings 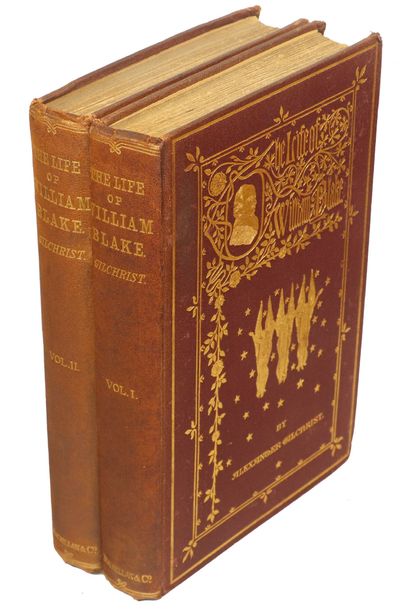 by Gilchrist, Alexander
London: Macmillan and Co, 1863. First edition. Hardcover. Very Good. 2 vol. 8vo. [5], vi-xiv, [3], 2-389, [3]; [5], vi-vii, [4], 4-268 pp. Original maroon cloth lettered and decorated in gilt on the front board and spine. Illustrated from Blake's own works, in facsimile by W.J. Linton, and in photolithography; with a few of Blake's original plates. Volume one illustrated by a frontispiece of Blake with eleven plates, six of which are in color, and around 47 in-text engravings; volume two illustrated with the fold-out plate of Canterbury Tales as its frontispiece, a few in-text illustrations, 21 colored plates, and 16 black and white plates at the rear of the volume. Several leaves of volume two unopened, with a few leaves in volume one uncut. Green endpapers and pastedowns with an armorial bookplate in volume two, volume one's endpapers and pastedowns are white, replacing the original green flyleaves. Oxford DNB, Robert N. Essick, "Blake, William (1757-1827)"; H.H. Gilchrist, Gilchrist, Alexander (1828-1861)". Alexander Gilchrist was Blake's biographer and an art critic. His widow Anne would go on to finish his comprehensive biography of Blake, with the assistance of the Rossetti brothers, (Gilchrist's friends and fellow writers). According to the Oxford DNB, Gilchrist's biography of Blake is:"[a]rguably the most important book ever published on Blake, Gilchrist's biography sets Blake within his intellectual and social milieu, but presents him as a secular saint ... " (Oxford DNB, Robert N. Essick, "Blake, William (1757-1827)"). William Blake would go on to become a seminal figure in English poetry and artistry, with his signature style of incorporating other-worldly experiences with poetic verses. Blake was a master of syncretism, writing poetry and verse that combined Greek, English, and Hebrew mythology. His reputation and art would go on to influence the intellectual revolution and sexual revolution of the 1960s. A beautiful set, replete with Blake's engravings and poetry, which bring the artist's story to life. A Very Good set with minor wear to the extremities: leaves are largely clean with minor spotting and a few faint creases to some corners in volume one. (Inventory #: 00009012)
$1,000.00 add to cart or Buy Direct from
Evening Star Books
Share this item