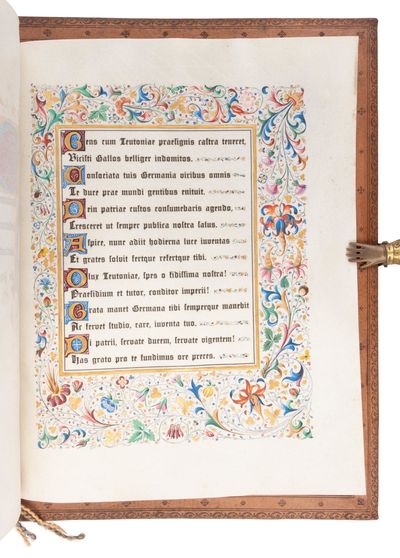 Sumptuous salute to Prussian statesman on his 80th birthday, five years after he resigned as chancellor of Germany, and three years before his death. This large congratulatory document was one of 450,000 letters and cards sent to Bismarck to celebrate his birthday, an event which cemented his legendary status in German history for his role in the founding of the Reich: One of the most significant manifestations of the gradual change in public perceptions of the Iron Chancellor were the celebrations in honor of Bismarcks 80th birthday in 1895. The 80th birthday celebration, which this document commemorates, cemented Bismarcks changing role in historical perceptions of his leadership. (Inventory #: 5983285)
$1,875.00 add to cart Available from
Coconut Rose Books
Share this item