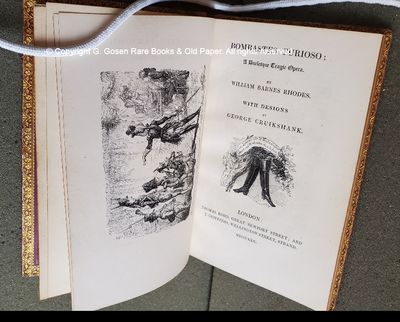 by Rhodes, William Barnes
Rhodes, William Barnes. BOMBASTES FURIOSO: A Burlesque Tragic Opera. With Designs by George Cruikshank. London: Thomas Rodd, Great Newport Street; and T. Griffiths, Wellington Street, Strand. MDCCCXXX [1830]. Printed by Lowndes and White, Crane Court, Fleet Street. 12mo. 16cm. [1 blank; 34 pages followed by a full-page woodcut , "Tu ral, lu ral, la, /Tu ral, laral, laddi" below three men and a woman dancing and singing; original wrapper front and back, with eleven blank sheets bound in behind]
Nine woodcuts: seven full-page and the vignette on the title page, and one on the wrapper (bound in) which differs from the one on the title page. Both feature a pair of boots, initialed "G.C." with the same motto: "who dares this pair of Boots displace / must meet Bombastes face to face." The image on the wrapper has the boots in a standing position with the feet parallel, pointing in the same direction. The vignette on the title page has the feet pointing in opposite directions. The cover to the wrapper is whitish-yellow paper. An advertisement for Tom Thumb, with Illustrations by George Cruikshank announces it is "in the press" appears on the wrapper's back. Below are ten more titles "in active preparation" by T. Rodd.
A verse drama of forty minutes running time written by William Barnes Rhodes (1772 – 1826). A career banker at the Bank of England, Rhodes rose to the position of Chief Teller. He was a collector of English drama, and the sale of his collection, prior to his death, went on for ten days. He left behind two other dramas, neither of which was printed at the time Bombastes was printed. A volume of Epigrams
was printed in 1803. This edition is one of at least two printings by T. Rodd, as the publisher's biography of Rhodes concludes, "The mirth-inspiring pencil of Mr. George Cruikshank, seconded by the talents of the Artists whose names grace the cuts, enable the Publishers to present once more for Public approbation BOMBASTES FURIOSO." Cohn mentions another printing, of few copies with letterpress and woodcuts on India paper. (The first printing by Rodd is believed to have been in 1822.) Cohn, 692.
Bound in gilt-ruled mottled brown calf, binder's stamp of F. Bedford. Maroon endpapers, page edges gilded. Bookseller's tag of Henry Southeran & Co. at 14 Strand, London, W.C. This copy was re-backed, with the remains of the original back strip laid down. On the front pastedown is the armorial book plate of J. Leveson Douglas Stewart Glenogil, and on the back pastedown is the armorial book plate of Albert L. Cotton. J. Leveson Douglas Stewart Glenogil is listed in William Carew Hazlitt's A Roll of Honor…, published by Quaritch in 1908. Wear to the binding noted, the text block is fine. (Inventory #: 386)
$450.00 add to cart Available from
Gosen Rare Books
Share this item

London : Published by Sherwood, Jones and Co. Paternoster-Row , 1823
(click for more details about POINTS OF MISERY; or FABLES FOR MANKIND: Prose and Verse, Chiefly Original, by Charles Westmacott. Illustrated with Twenty Designs by Robert Cruikshank. )

Smith, Elder and Co., Cornhill. , 1832
(click for more details about The Comic Offering; or Ladies’ Melange of Literary Mirth, for MDCCCXXXII. Edited by Louisa Henrietta Sheridan.)
View all from this seller>