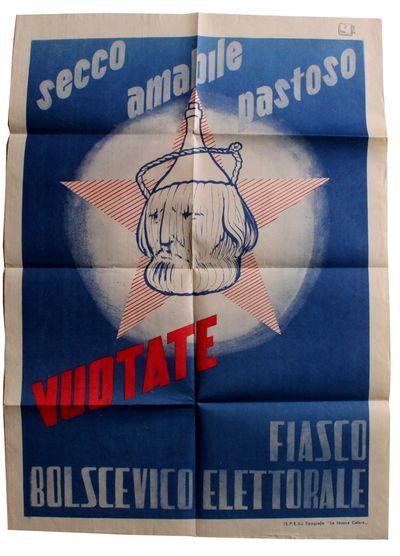 Rome, Italy: Various Publishers, 1948. Seven posters. All folded as issued, all but one near fine or better with dimensions and imperfections noted below. Translations of most of the text are available. This is a collection of posters which document early United States Cold War policy as well as the first covert operations of the CIA. The 1948 elections in Italy were the first since 1922 and the United States backed the Christian Democratic Party against the Popular Democratic Front (communist) and the Socialist Unity parties. According to Mario Del Pero in "The United States and 'Psychological Warfare' in Italy, 1948-1955" (The Journal of American History, Vol. 87, No. 4 (Mar., 2001), pp. 1304-1334) "The Italian elections of April 1948 are considered a crucial turning point of the early Cold War. The pro-Soviet Left was severely defeated at the polls, while the main Italian anticommunist party-the Christian Democrats gained an absolute majority in the new parliament. But those elections were also relevant insofar as they constituted an important precedent for United States foreign policy . . . The electoral results were read in Washington as proof of America's ability to influence the domestic affairs of other nations through the use of unconventional instruments." One of the operatives involved in covert operations in the 1948 election was F. Mark Wyatt. He gave an interview in 1996 where he described his efforts and stated, "We would like to have done this in a more sophisticated manner. Passing black bags to affect a political election, is not really a terribly attractive thing. But we only had a few months to do this, and that was the principal thing that we did . . . we had bags of money that we delivered to selected politicians, to defray their political expenses, their campaign expenses, for posters, for pamphlets . . ." These posters, printed just six weeks before the elections, were part of the overall covert and overt onslaught of American influence on the election which also included short wave radio transmissions to Italy backed by the State Department, distributions of leaflets extolling the United States' financial support for Italy, letter writing campaigns, and more. Save for #3, below, we find no holdings via OCLC, KVK, Copac or internet searches for the following posters: 1. 315 miliardi per la rinascita del Merrogiorno. [315 billion lire for the rebirth of South Italy]. 27 1/8" x 39 3/8". This poster lays forth a number of accomplishments of Alcide De Gasperi's government in Southern Italy including agricultural reforms, infrastructure such as road building and aqueducts, the creation of factories and jobs, and more. 2. Libertas. 39¼" x 27½". A huge and striking image of the shield of the Christian Democratic Party. 3. Ecco Il Vero Fronte Comunista. [Here Is The True Communist Front]. 13½" x 19¾". A hint of corner wear. This is an explicit condemnation of communism. The image next to "Peace" shows the Russian military marching in a parade with the text stating it is preparing for war. "Labor" is depicted by imprisoned laborers in Siberia and "Freedom" shows seven men hanging from a gallows with the words, "The Soviet dictatorship accepts no opposition." 4. Secco Amabile Pastoso. Vuotate. Fiasco Bolscevico Elettorale. 27 3/8" x 19 5/8". Two tiny chips and some edgewear at bottom right. This poster mocks communism by portraying Garibaldi or Marx as a bottle of wine combined with interesting wordplay. It begins with descriptive adjectives for wine, "dry, sweet, mellow" followed by "Vuotate", which translates to "empty it" as opposed to "votare" for "vote." The last line could be translated as both "Bolshevik electoral flask" or "Bolshevik electoral failure." Internet searches reveal a holding at Istituto Luigi Sturzo and one sold at auction. 5. Giornale di Praga. [Prague Newspaper]. 27¼" x 39¼" Creases at upper corners, a couple of tiny chips and closed tears at margins, a couple minuscule separations at intersections and a small patch of light toning at the vertical fold at the far left. This poster uses Prague as an example of what would happen if communists seized power in Italy, stating along the top that 16 million men had been killed behind the Iron Curtain. It also pointed out Pietro Nenni's (a leader of the Popular Democratic Front) support of the Communist party in Prague while pointing out suppression of opposing views and the deportation of opponents to work camps. 6. Falsi della propaganda. [Lies of the Communist Front's Propaganda]. 39 3/8" x 13 7/8". This poster set out to limit the impact of communist propaganda and directly mentions the United States. It disputes that De Gasperi approved the execution of Cesare Battisti and pointed out that a booklet distributed by Communists neglected to discuss terror regimes and purges behind the Iron Curtain. It also highlighted the economic contributions of the United States to rebuild Italy while, "from Russia, we didn't get back even our own prisoners!" 7. Bilancio Per Il Aprile 18. [Report for April 18]. 23 1/8" x 32¾". Very good: lightly toned, a couple of chips in upper right corner, one separation at intersection affecting a character of text. Broken into several sections, this poster, like the one above, disputes communist messaging. For example, under a discussion of the Soviet Union's desire for peace, it pointed out Tito's repressions while an image of someone desecrating a cross stated communism's hatred of religion while giving lip service to respecting it. Another version of Marx as a wine bottle, as well as Stalin depicted as a jack in the box, can also be seen. A rare and striking group of propaganda posters reflecting the United States' first covert attempt to influence a foreign election which laid the groundwork for similar future efforts in other countries. (Inventory #: 2986)
$5,000.00 add to cart or Buy Direct from
Langdon Manor Books
Share this item