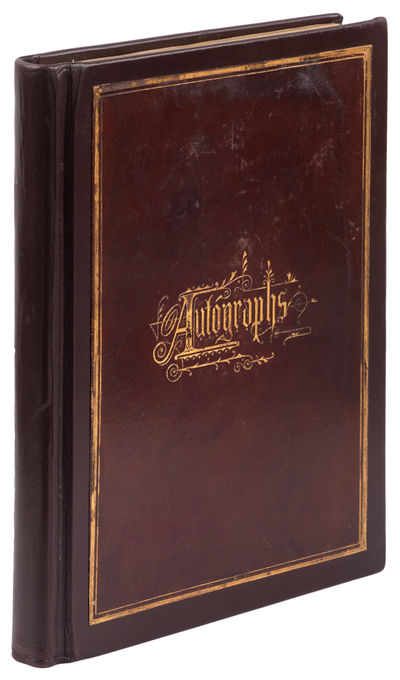 by [Garfield, James; Chester A. Arthur; Benjamin Harrison; et. al.]
8vo. Expertly rebound in brown leather, preserved original gilt leather title; pages bear mild soiling at margins but otherwise clean; housed in custom slipcase bound in red cloth.
This album features a rare signature from Garfield during his tenure as sitting president: "James Garfield, May 6, 1881" is on the first leaf. Following leaves feature the signature of Garfield's Vice President (and future President) Chester A. Arthur and over 100 additional autographs from Garfield's cabinet, Senators, and Congressmen. The autograph album is a historically significant collection from one of the shortest presidencies in American history. Taking office on March 4th, 1881, Garfield was shot months later on July 2nd, making any and all items signed by Garfield during his presidency scarce and desirable.
Garfield's signature is dated to May 6th, a vital historical moment in which Garfield was in the midst of a heated conflict with powerful New York Senator Roscoe Conkling over Garfield's choices for federal office positions in New York. Their animosity resulted in nationwide critiques of Garfield and Conkling's standstill, captured by that day's newspaper headline asking, "Why not lock up Garfield and Conkling in a small room and let them fight this thing out?" (Mount Vernon Democratic Banner, May 6th, 1881). Conkling was a powerful politician supported by Ulysses S. Grant and a mentor to Chester A. Arthur, whom Conkling unsuccessfully advised to decline Garfield's vice presidency. Immediately after Garfield's inauguration, Conkling presented a list of men to Garfield for nomination to the New York Federal offices, which Garfield ignored. Instead, Garfield nominated James G. Blaine as Secretary of State and William Windom as Secretary of the Treasury (both Blaine and Windom's signatures are included in the autograph album as well). Ten days after the autograph album was signed with Blaine and Windom's signatures, Conkling resigned with fellow Senator Thomas C. Platt, a key development in the ability of the Senate and future President Chester A. Arthur to pass measures related to civil service reform.
Additional pages in the album include over 100 historically significant signatures, including all members of Garfield's cabinet and over 100 members of Congress during Garfield's tenure. These signatures include Secretary of State James G. Blaine, Secretary of the Treasury William Windom, Secretary of War Robert Todd Lincoln (Son of Abraham Lincoln who would be present at Garfields assassination and twenty years later, at McKinley's), Secretary of the Navy William H. Hunt, Postmaster General Thomas L. James, Secretary of the Interior Samuel J. Kirkwood, and Attorney General Wayne MacVeagh, all of whom sign on their own separate page. Additional signatures from over 100 Senators and Congressmen include those from veterans of the Civil War, such as Ambrose Burnside and William Rosecrans, and former Confederate Vice President Alexander Stephens, who adds a length inscription for the owner: "Among many good Mottos few are better than this line by Pope: 'Honor and Shame from no condition rise; Act well you part[:] there all the honor lies' Alexander H. Stephens M C of Ga National Hotel Washington DC 22d May 1881" (Inventory #: 5983291)
$6,250.00 add to cart Available from
Coconut Rose Books
Share this item