Oriental Assembly With 129 Photographs taken by the Author 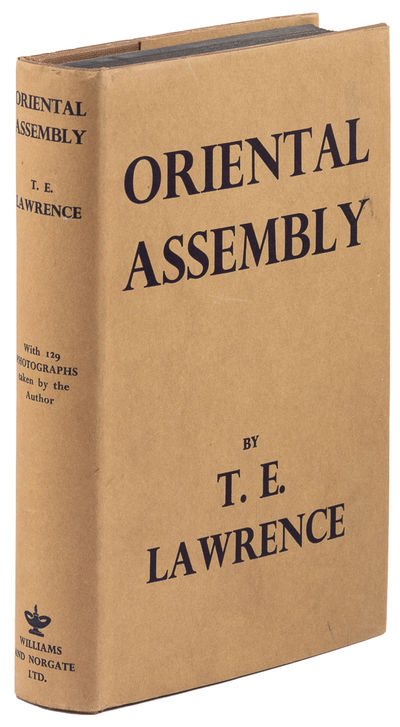 by Lawrence, T. E.; A. W. Lawrence (Editor)
London: Williams and Norgate LTD., 1939. First Edition. Hardcover. Fine/fine. 8vo.,pp. xii, [2], 291. Original buckram lettered in gilt. From the jacket flap, this book contains uncollected writings by Lawrence about the Middle East from his 1911 exploration and survey of Crusader Castles chiefly from a diary he kept. He studied, photographed and collected antiquities for the Museum at Oxford. The 129 illustrations are from these photographs. Further, the suppressed introductory chapter to The Seven Pillars of Wisdom is included. Dustjacket not priced clilpped, no chipping. O'Brien 221. Fine in Fine dustjacket. A very handsome copy.

T. E. Lawrence, a.k.a. Lawrence of Arabia, (16 August 1888 19 May 1935) was a flamboyant British archaeologist, military officer, diplomat, and writer. He earned his reputation for his liaison role during the Arab Revolt against the Ottoman Empire during the First World War and his ability to write about his exploits and the Arab people. Seven Pillars of Wisdom, his famous literary work, is critically acclaimed as having been written with extraordinary skill, intellectual and artistic achievement. Winston Churchill calls Seven Pillars of Wisdom one of the greatest books ever written in the English language. As a narrative of war and adventure it is unsurpassable." Further, Churchill, in his hyperbolic style, believes that Lawrence would have led the Arabs all the way to Instable had the war not ended. Lawrence was tragically killed in a motorcycle crash at the age of 41. (Inventory #: 5983351)
$600.00 add to cart Available from
Coconut Rose Books
Share this item