[ANNOTATED VERNACULAR PHOTOGRAPH ALBUM KEPT BY AN EARLY POPULAR MUSIC FAN, FEATURING BILL HALEY & HIS COMETS, HANK THOMPSON AND THE BRAZOS VALLEY BOYS, HANK SNOW, AND OTHERS IN THE EARLY DAYS OF ROCK AND ROLL, WITH NUMEROUS ADDITIONAL SIGNED PHOTOGRAPHS] 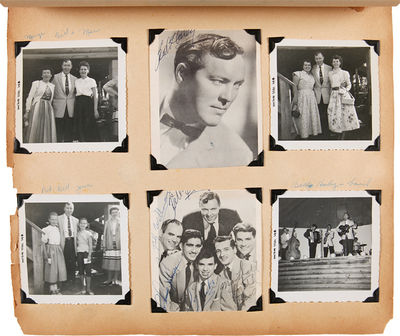 by [Music Photographica]
[Pennsylvania and New Jersey, 1955. 130 black and white photographs, measuring from 2 x 3 1/2 inches to 8 x 10 inches, almost all with printed captions in the margins dated May or June 1955, most also with manuscript captions written below the image in red or blue pencil. Plus, two souvenir programs; one 6-x-9-inch promotional color photograph, signed; and twenty 8 x 10- inch promotional black and white photographs, most signed. Square folio. Contemporary red leatherette photograph album. Covers soiled, front cover detached, minor edge wear. One leaf detached, minor wear to photographs, album pages toned, chipped, and somewhat brittle. Very good. A fantastic personal photographic record of early rock and roll and country music stars from 1955, compiled by a woman named "Ann" who traveled to document her musical interests. Many of the photographs are non-professional, and were likely taken by Ann or a friend or family member. Several of the professional pictures of country music artists - including Eddy Albert, Faron Young, Porter Wagoner, and the Maddox Brothers and Rose - are signed by the stars themselves. Two locations can be identified from the pictures - Uncle Roy's Beautiful Sunset Park in Jennersville, Pennsylvania and Circle A Ranch in Deer Park, New Jersey, but a variety of small clubs, auditoriums, jamborees, and honky tonks are depicted. The album features mounted photographs capturing notable musicians, such as Hank Thompson (several photos, including one of their tour bus), Shorty Long, Hank Snow, Kenny Roberts, Clair "Tiny" Mickey, Sally Starr, Mickie Evans, Tim Holt, the Tune Dusters, the Eckert Family, and others. One original photograph shows Ray Meyers, an accomplished steel guitar player despite being born without arms, signing an autograph with his right foot. The musician photographs are interspersed with some family photographs. Most notable are the dozen photographs featuring Bill Haley & His Comets at the height of their fame. Their most famous song, "Rock Around the Clock," which is credited by some for bringing rock and roll music to the mainstream, was released the year before, and then featured in and popularized by the release of the film, THE BLACKBOARD JUNGLE, in March 1955. Two of the Bill Haley photographs are signed, though the compiler trimmed them a bit, and a few of them feature Haley with various local women identified in the captions. Accompanying the album are twenty-one larger promotional photographs, many of which are signed. These include Hank Snow (color photo, signed on verso); Hank Thompson and the Brazos Valley Boys (signed by Snow in the image); another of Hank Snow by himself (signed in the image); Faron Young (signed in the image); Porter Wagoner, Junior "Speedy" Haworth, and Don Warden (signed by all three in the image); Eddy Arnold (signed in the image); Lash La Rue (signed in the image); Jesse Rogers (inscribed to "Ann" on verso); Maddox Bros. and Rose (signed in bottom margin); the Eckert Family (giant photographic postcard signed by all on verso); Rosie and Retta (signed by Retta Maddox on verso); Gordon Terry, "Champion Old-Time Fiddler (signed in the image); prolific singer-songwriter Jean Shepard (with her signature on the verso); Lloyd Arnold (inscribed on verso); Lloyd Arnold with his band, the Rockin Drifters (inscribed to "Ann" in the bottom margin); cowgirl TV hostess Sally Starr (inscribed on the verso, "To Ann Lovingly Sally Starr"); Don Reno & Red Smiley and the Tennessee Cut-Ups (signed by the whole band on the verso); the Wilburn Brothers (signed by both in the image); and a few unsigned photos, including one featuring Jimmy Dean. There are also two souvenir programs laid in - a promotional program for Webb Pierce (signed by him inside) and a SOUVENIR PICTURE ALBUM GRAND OPRY (with signatures by Kitty Wells and Lester Wilburn of the Tennessee Mountain Boys inside). A wonderful collection of early rock and roll and country music notables compiled by a fan in 1955, at the point when rock and roll was beginning to emerge in the popular culture. (Inventory #: WRCAM55629)
$3,000.00 add to cart or Buy Direct from
William Reese Co. - Americana
Share this item

[N.p., but likely Clearfield, Pa 1889
(click for more details about [MANUSCRIPT MEMOIR OF THE EXPERIENCES OF GERMAN IMMIGRANT ALBERT WALTHER IN MID-TO- LATE 19th-CENTURY AMERICA, INCLUDING HIS JOURNEY TO NEW ORLEANS, HIS LIFE IN ST. LOUIS AND PENNSYLVANIA, A LENGTHY ACCOUNT OF HIS SERVICE WITH THE 84th INFANTRY REGIMENT OF THE PENNSYLVANIA VOLUNTEERS DURING THE CIVIL WAR, AND HIS CAPTURE BY THE REBELS, WITH MANUSCRIPT MAPS OF THE BATTLE OF KERNSTOWN, THE BATTLE OF PORT REPUBLIC, AND PART OF THE INTERIOR OF LIBBY PRISON])