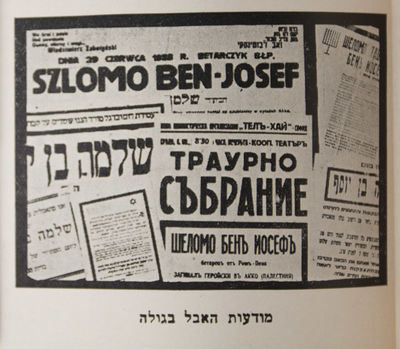 by Yeivin, Yehoshua Heschel (ed.)
Geneva [Tel Aviv]: [Hotsaat Keren Tel-Hai ve-Shilton Betar], 1939. First edition. Hardcover. g- to vg-. Quarto. [3] 106pp. (single-sided leaves) + photo-illustrated plates. Soft tan cloth boards. This extremely scarce work is a compilation of writings, essays, tributes, poems and articles on executed Irgun member Shlomo Ben-Yosef (1913-1938), who has been seen as a martyr by the Revisionist Zionist community. Interleaved throughout are unpaginated double-sided plates containing b/w photographic reproductions. It was used as effective propaganda for the Beitar movement and other like-minded Revisionist Zionist groups. Although the publication of this work is attributed to Geneva, it is believed that this was an early copy of the work purposely misattributed to the protect the Beitar organization from legal and criminal prosecution from British authorities, and it was in fact printed in Palestine (Tel Aviv). Additionally there is no publisher identified in the book. Ben-Yosef, was a Ukrainian-born member of the Betar movement, who in 1937 emigrated to Palestine and joined the Irgun. On April 21st, 1938 he was one of three Betar members who participated in the infamous failed attack on a bus of Arab civilians traveling on the Tiberias-Rosh Pina road. The attack was in revenge for the recent March 28, 1938 ambush of the car of ten Jews, by Arabs, on the Acre-Safed, resulting in the death of six. Soon after this attempted attack the participants were discovered nearby and in possession of weapons, by British authorities. Ultimately Ben-Yosef was sentenced to death by hanging, while the other two individuals received a life in prison sentence, and a not-guilty sentence by reason of insanity, respectively. Ben-Yosef was executed on June 29th, 1938, and was the first Jew executed by the British authorities during the mandate period. Text in Hebrew. Binding with some rubbing to extremities, including along the spine. Soiling to the covers, especially the back cover. Light to moderate rippling, water staining and/or foxing to the interior covers and endpapers, due to exposure to moisture. Age toning to edges of pages throughout. Book block tight. Binding in good-, interior in very good- condition overall. Hebrew title: ספר שלמה בן־יוסף, משכית גבורי עם ישראל, כרך א׳ aka: Sefer Shlomo Ben-Yosef. (Inventory #: 47152)
$3,750.00 add to cart or Buy Direct from
Eric Chaim Kline Bookseller
Share this item