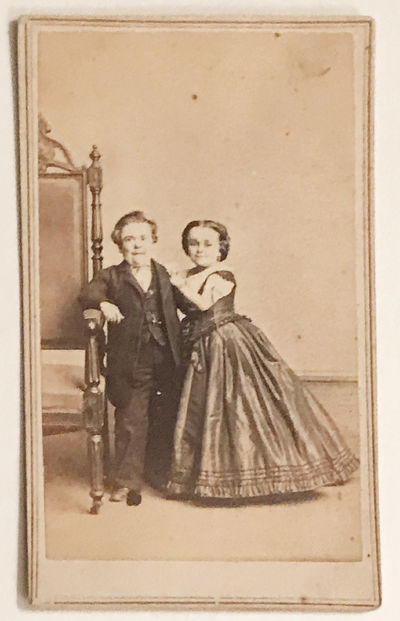 signed the first with light smudges but overall very good condition with clear dark impressions of the two figures, the other three nea

by (CIRCUS)
Original carte-de-visite photographs of Charles Sherwood Stratton, better known by his stage name "General Tom Thumb", a dwarf who achieved great fame as a performer under circus pioneer P. T. Barnum, here photographed with his wife Lavinia Warren, AUTOGRAPHED in Stratton's handwriting on verso "Genl Tom Thumb & Mrs Tom Thumb - 1863 August". The couple were married in February 1863 for which it is said President Lincoln hosted them with a reception at the White House. The 2nd picture of the Strattons in their wedding costumes, also a picture of their best man and bridesmaid Commodore Nutt and Minnie Warren (Lavinia's sister), and the wedding party together, all in especially fine condition with dark brown hues, each having facsimile autographs on the verso by their subjects. In addition, an 1865 photograph of "Gen. Tom Thumb, Wife and Child" (verso blank). Altogether, 5 carte-de-visite original mounted photographs, the first with imprint verso backboard of Charles D Fredericks & Co, 587 Broadway, New York, then three "from photographic Negative by [Matthew] Brady" imprinted by E & H T Anthony, 501 Broadway, the last by J Hall (junction York and Fulton Sts, Brooklyn).
Born in Bridgeport 1838 to parents who were of medium height, Charles was a relatively large baby, weighing 9 pounds 8 ounces (4.3 kg) at birth. He developed and grew normally for the first six months of his life, at which point he was 25 inches (64 cm) tall and weighed 15 pounds (6.8 kg). Then he suddenly stopped growing. By late 1842 (4 years old) Stratton had grown only one inch additional though his body was proportionate and functional. The showman Phineas T. Barnum heard about Stratton and, after making arrangements with his parents, taught the boy how to sing, dance, mime, and impersonate famous people. He toured America and Europe in 1845 during which time his performances marked a turning point in the history of freak show entertainment. Prior to Stratton's debut, the presentation of "human curiosities" for the purpose of entertainment was deemed dishonorable and seen as an unpleasing carnival attraction. However, after viewers were introduced to Stratton and performances, he was able to change the perception people held toward freak shows. Stratton's lively entertainments made these types of carnival shows one of the most favored forms of theatre in the United States.
His marriage to Lavinia Warren, also a little person, became front-page news. The wedding took place at Grace Episcopal Church, and the wedding reception was held at New York City's Metropolitan Hotel. The couple stood atop a grand piano at the reception to greet some 10,000 guests. Rare to find a vintage picture of the couple dated and inscribed so early in their marriage and nice companion images, inscriptions on three other pictures are in facsimile handwriting. (Inventory #: BB055)
$1,200.00 add to cart Available from Battledore
Share this item