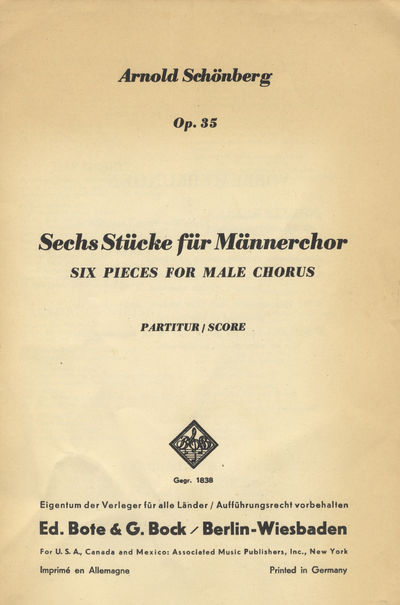 by SCHOENBERG, Arnold 1874-1951
Berlin: Ed. Bote & G. Bock [PNs B. & B. 19979-19984], 1930. Large octavo. Original publisher's printed wrappers. 1f. (title, preliminary notes), 3-47 (music), [1] (blank) pp. With separate plate number to each of the six choruses and separate copyright notice to the foot of the first page of each piece. Text underlay in German and English, with German text by Schönberg with English translation by D. Millar Craig and Adolph Weiss. Wrappers detached and browned. Slightly worn; some internal browning. First Edition of the complete cycle. Rufer (E), pp. 58-60. GA B/18/2, pp. 223-24. Number 4 had been commissioned by the Deutscher Arbeiter-Sängerbund and was first published as no. 248 of the anthology Männer-Chöre ohne Begleitung, gesammelt von Alfred Guttmann (Male choruses without accompaniment, collected by Alfred Guttmann), Deutscher Arbeiter-Sängerbund Berlin [1929], publisher's no. 1350, pp. 687-690. "And yet behind the absolute eternal values of this opus there seems to be something temporary as well: just as in the magnificent texts you reflect upon today's communal ideas [...] it also appears that you (you who have always shown the younger generation [the way]) for once wished to demonstrate something after the fact, and thereby wanted to show that such simple forms which are generally associated with cheap communal music can also lay claim to the highest standards of artistry and proficiency." Alban Berg to Schoenberg, February 1931. (Inventory #: 33232)
$303.00 add to cart or Buy Direct from
J. & J. Lubrano Music Antiquarians
Share this item