Researches into the History of Playing Cards: with Illustrations on the Origin of Printing and Engraving on Wood 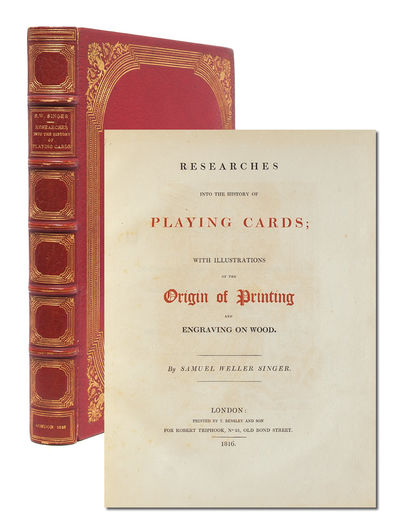 by Singer, Samuel Weller
London: Printed by T. Bensley & Son for Robert Triphook, 1816. First edition. Limited edition, one of 250 copies for subscribers. Full red crushed morocco with gilt to spine and boards. Five raised bands. Dentelles gilt. Top edge brightly gilt. Marbled endpapers. Bookplate of Robert Hoe III (1839-1909) to front pastedown with armorial bookplate of Mary Macmillin Norton below. Collating complete including subscribers' list, eleven engraved and eight colored woodcuts and two additional colored plates: xvi, [2], 373, [3]. A beautiful copy with just a hint of rubbing to the corners. Occasional faint offsetting, but in all internally fresh and bright. With provenance from the library of American businessman and printing press equipment producer Robert Hoe III, whose library was a unique and valuable resource in the history of printing and typography. His collection went to auction in 1912, likely where is was acquired by Ms. Norton. Samuel Weller Singer was a noted scholar of Elizabethan literature and history, but he is best remembered for this pioneering treatise on card games. Researches into the History of Playing Cards is an investigation not only of the history of playing cards but a sourcebook of sumptuous illustrations detailing the evolution of playing cards as works of art. Singer's erudition is on display in the book's footnotes where he traces the etymological and historical nuances of cards and card games in other languages in the book's first section. The second section offers a history of printing, as Singer shrewdly considers the rise of printed and engraved playing cards as part and parcel with developments in printing and printmaking. The final section is an instruction manual on card games. Sumptuously illustrated with engravings and woodcuts, Researches into the History of Playing Cards is a celebration of the history of cards and print making. (Inventory #: 3502)
$5,500.00 add to cart or Buy Direct from
Whitmore Rare Books
Share this item