Essay on Gothic Architecture. With Various Plans and Drawings for Churches: Designed Chiefly for the use of the Clergy 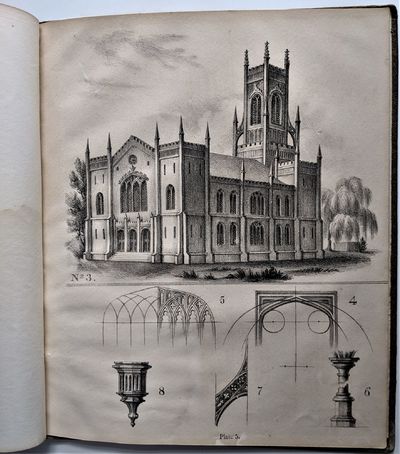 by Hopkins, John Henry
Burlington (VT): Printed by Smith & Harrington, 1836. 4to.   275 x 225 mm., [10 ¾ x 9 inches].  vi. 46 pp.  Lithographic title-page and 13 full-page lithographic plates.  Original cloth, paper label on spine; cloth discolored and shows some remnants of water staining, spine and tips expertly repaired with tissue, spine label chipped; tide marks to preliminary leaves, frontispiece and title-page, plates 12 and 13 and rear end leaves.  With fault a good copy. First edition.  Illustrated with fourteen finely drawn and printed lithographs designed by the author and printed by the Pendleton's Lithographic Company, Boston.  "John Pendleton, Lithographer.  Born in New York State.  While traveling in France, he became interested in lithography and studied the art under the best masters in Paris.  On returning to America, he settled in Boston with his brother, a copperplate printer, and they established a lithographic establishment in 1825." John Henry Hopkins was an Irish immigrant, home schooled by his mother, who became a lawyer, musician, ordained minister, bishop and author of over thirty publications.  He studied gothic architecture during his time in Pittsburg where he was charged with supervising the construction of Trinity Church.  Dismayed with the unsightly designs of most churches in America he decided to compile his information as a guide to the elements of style and design characteristics of the gothic.  He became of the most notable experts in the field and he published this work, one of the first of its kind in America, for the benefit of local ministers charged with the building of churches in the gothic style. Hitchcock American Architectural Books, 606. Fielding, Dictionary of American Painters, Sculptors and Engravers, p. 278.  Peters, American on Stone, pp. 312-323. Allibone, Critical Dictionary of English Literature and British and American Authors I, p. 885.  (571). (Inventory #: 571)
$1,200.00 add to cart Available from
De Simone Company
Share this item
De Simone Company, Booksellers
Offered by