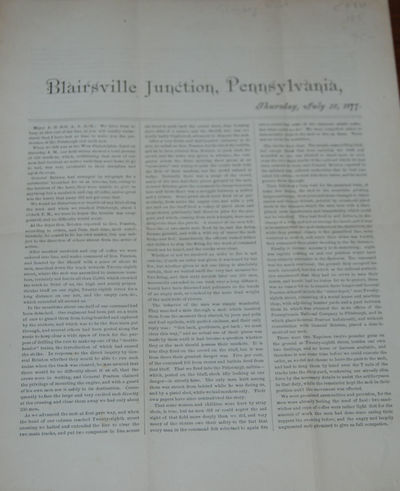 by [PETTIT, Silas (Major and Judge Advocate]
[Pittsburgh, PA], 1877. 4to, pp. 4 (single folded sheet), a very good copy. Rare, the OCLC locates just the one copy at the Clements Library. The railroad strike of 1877. from Wikipedia: "The Pittsburgh railway strike occurred ... as part of the Great Railroad Strike of 1877. Between July 21 and 22 in Pittsburgh, a major center of the Pennsylvania Railroad, some 40 people (including women and children) were killed in the ensuing riots; strikers burned the Union Depot and 38 other buildings at the yards. In addition, more than 120 train engines and more than 1,200 rail cars were destroyed. Due to track damage, trains did not run for a week following the cessation of violence. Estimates of losses ranged from $2 million to $5 million, according to the railroad company and an 1878 report by a state legislative investigative committee. Pittsburgh was the site of the most violence and physical damage of any city in the country during the Great Strike. Fresh troops arrived in the city on July 28, and within two days peace had been restored and the trains resumed." The text is a letter outlining the activities of the national guard. (Inventory #: 59483)
$248.00 add to cart or Buy Direct from
Second Life Books
Share this item

THE UNVANQUISHED,; drawings by Edward Shenton

CALL TO GERMAN CITIZENS OF NEW YORK CITY; to protest in Union Square against blue laws

1866
(click for more details about CALL TO GERMAN CITIZENS OF NEW YORK CITY; to protest in Union Square against blue laws)
View all from this seller>