The Negro as a Workingman [article in] The American Mercury, A Monthly Review Edited by H.L.Mencken Vol. vi November 1925 No. 23 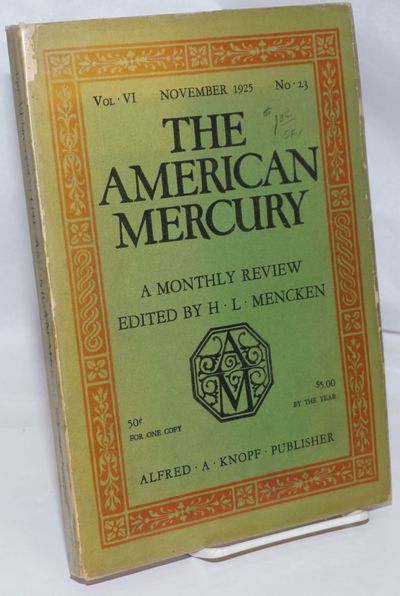 by Miller, Kelly
New York: Alfred.A.Knopf.Publisher, 1925. Magazine. 4p., (31-313) of the entire magazine (257-384 + lxxii, ads), mag measures 10x7 inches. Externally this issue is edgeworn with a chip near the head and weak hinges; a former owner has neatly enclosed covers with a clear plastic-like adhesive sheet that strengthens and preserves; without it, front cover would be detached. Not a recent 'improvement" but it works well; we believe the material to be stick-on "shelfpaper;" unfortunately the process also seals in soil, a fragment of flower-petal, and an old pencilled price. Magazine contents, Kelly's piece included, are soundly bound, clean and unmarked. A good (good-only) copy. Miller, a mathematics prodigy who taught both mathematics and sociology during his long and distinguished tenure at Howard University, developed a national reputation as a lecturer and writer. Initially critical of Booker T. Washington's Atlanta Compromise, he grew sceptical of other political positions taken by African American leaders, particularly those of the Niagara Movement, as he searched for a common ground between radicals and conservatives in the fight angainst racism. RACE ADJUSTMENT reflects his goal of going beyond industrial education ("The ideal is not a working man but a man working") to a fuller integration of African Americans into all aspects of American society. (Inventory #: 252740)
$15.00 add to cart or Buy Direct from Bolerium Books
Share this item

Remember Centralia. Don't patronize Our House / Corner Washington and Occidental. They contributed to a fund to convict our boys in Centralia. They use scab coal from Pacific Coast Coal Company. We never forget! [leaflet]

[Seattle] : [Industrial Workers of the World] , 1920
(click for more details about Remember Centralia. Don't patronize Our House / Corner Washington and Occidental. They contributed to a fund to convict our boys in Centralia. They use scab coal from Pacific Coast Coal Company. We never forget! [leaflet])