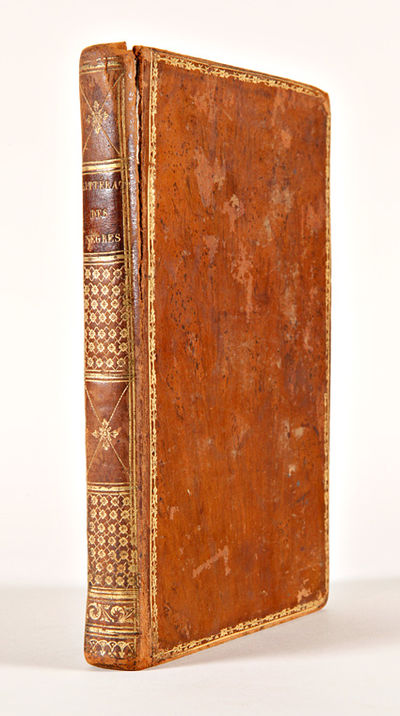 by Grégoire, Henri
Paris: Chez Maradan, Libraire, 1808. xiv,287,[1]pp. Half title. Contemporary tree calf, boards with gilt border, spine elegantly gilt in panels, marbled edges and endpapers. A few scuffs to extremities, corners bumped, joints starting to tear but still strong. Light tidelines to lower right corner of first third of textblock (no text affected), light tanning. Very good. First edition of this important and uncommon early history of African-American literature and arts. Abbé Henri Grégoire (1750-1831), former constitutional bishop of Blois in France, was a revolutionary (one of the first clerics to join the Third Estate) as well as a prominent abolitionist, humanist, and teacher of Alexander Dumas. It was on Grégoire's motion in May 1791, that the Constituent Assembly passed its first law admitting some wealthy free men of color in the French colonies to the same rights as whites. The present work, which established Grégoire's reputation, strikes at the hypocrisy of contemporaries such as Thomas Jefferson in their assessments of the talents of African Americans. The author cites examples of gifted black writers and artists, including Benjamin Banneker, Phillis Wheatley, and Francis Williams. Chapters are devoted to the high moral qualities of African Americans, and talents in the trades and arts, especially literature. "This now scarce volume set the standards by which most biographical and historical works on gifted blacks were written during the following decades. Grégoire's book was an important and authoritative contribution to Afro- American historicity" - Blockson. BLOCKSON 18. (Inventory #: WRCAM55722)
$6,500.00 add to cart or Buy Direct from
William Reese Co. - Americana
Share this item