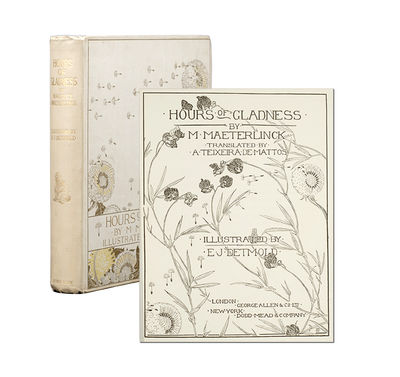 by Maeterlinck, Maurice. Edward J. Detmold (illustrator)
London: George Allen & Co, 1912. First trade edition. Original cream-colored cloth. Front cover lettered in gilt with floral decorations in yellow, brown, and gray after a design by Detmold (signed E.J.D. at lower right), back cover with a similar floral decorations in yellow, brown, and gray, spine stamped and lettered in gilt. White endpapers with small black floral vignette, all edges uncut. Mild soiling to cloth, spine very slightly darkened, small stain at upper edge of rear cover. Otherwise a very good copy, internally crisp and clean. Partially unopened. Collating x, 181, [1, printer's imprint], [1, publisher's device], [1, blank] and including twenty mounted color plates (including frontispiece). Belgian poetic dramatist and essayist Maurice Maeterlinck (1862-1949) "wrote in French, establishing himself as one of the leading figures in the symbolist movement with his play La Princesse Maleine (1889; English trans. 1892). In 1892 Pelléas et Mélisande appeared (trans. 1894), the work for which he is now chiefly remembered and the source of Debussy's opera of the same name (1902). He also achieved great contemporary popularity with L'Oiseau bleu (1908; The Blue Bird, 1909) and was awarded the Nobel Prize in 1911. He drew heavily on traditions of romance and fairy tale, and the characteristic tone of much of his drama is one of doom-laden mystery and timeless melancholy. He also produced a number of essays of a philosophical nature, including La Vie des abeilles (1901; The Life of the Bee, 1901) and L'Intelligence des fleurs (1907; The Intelligence of Flowers, 1907)" (OCEL). It was fitting for the illustrator to take up this work. After the tragic death of his twin brother and collaborator, Edward Detmold concentrated his talents on books, primarily of flowers and animals: "Detmold's finest plates are those produced for The Fables of Aesop (1909), The Life of the Bee (1911), and Hours of Gladness (1912), the latter with texts after Maurice Maeterlinck, the Belgian poet, naturalist, and mystic...A painting of chrysanthemums, contained in Hours of Gladness, is a glorious acknowledgement of the artist's debt to William Morris and Burne-Jones" (Larkin). Houfe 283. (Inventory #: 3596)
$550.00 add to cart or Buy Direct from
Whitmore Rare Books
Share this item