The Works of Charles Dickens (in 30 vols) 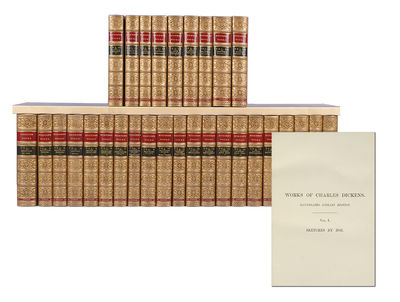 by Dickens, Charles
London: Chapman and Hall, 1891. Reprint of the Illustrated Library Edition. Thirty octavo volumes ( 221 x 141 mm.). Late 19th century full polished calf by Tout (stamp-signed on the verso of the front free endpaper). Covers with gilt triple fillet border with gilt corner ornaments, spines elaborately tooled in gilt in compartments with five gilt- dotted raised bands and red and green morocco gilt lettering labels, board edges with gilt-dotted rule, turn-ins decoratively tooled in gilt, top edge gilt, others uncut, marbled endpapers. Minor rubbing to extremities, headcaps on Volumes IX, X, and XXI expertly repaired. Small bookseller's ticket on rear pastedown of each volume. Illustrated with plates after the originals by "Phiz" (Hablot Knight Browne), George Cruikshank, Frederick Walker, Edwin Landseer, Daniel Maclise, John Leech, Marcus Stone, George Cattermole, and Luke Fildes. Partially unopened. A near fine set. "The Library Edition came about largely because of the suggestion of Forster that while Dickens's works were available in volumes in the Cheap Edition and in reprints of the serial parts, there was no high-quality edition that would appeal to the wealthy. Dickens eventually came round to the idea that an elegant edition could raise the stature of his writings. He faced a complication, in that the rights to the works were divided between Chapman and Hall and Bradbury and Evans. Consequently, the volumes contained the imprints of both publishers. With a dedication to Forster, the Library Edition appeared in 22 volumes in 1858-9 at 7s 6d per volume. Titles included Pickwick, Nickleby, Chuzzlewit, Old Curiosity Shop, Reprinted Pieces, Barnaby Rudge, Hard Times, Sketches by Boz, Oliver Twist, Dombey, Copperfield, Pictures from Italy, Bleak House, Little Dorrit, and Christmas Books. The only illustrations were the frontispieces. Between 1861 and 1874 this edition was reissued in 30 volumes with the addition of Tale of Two Cities, Great Expectations, Our Mutual Friend, The Uncommercial Traveller, A Child's History of England, Christmas Stories, and Drood. The reissue contained illustrations-the frontispieces plus additional illustrations by artists such as Marcus Stone, John Leech, and Clarkson Stanfield-and came to be known as the Illustrated Library Edition...Recognizing the continuing potential for sales of Dickens's works, Chapman and Hall in 1873 published a prospectus for the Second Illustrated Library Edition, containing, they contended, all the works the novelist wished to preserve. Calling it the first well-printed issue, with specially cast type and better paper than that used in previous editions, this set was published in 30 volumes between 1873 and 1876 and sold at £15 for the set, a high price for the time" (Oxford Companion to Dickens). Gimbel D72. (Inventory #: 3598)
$15,000.00 add to cart or Buy Direct from
Whitmore Rare Books
Share this item