[An Explanation of Dassier's Medals of the Sovereigns of England] 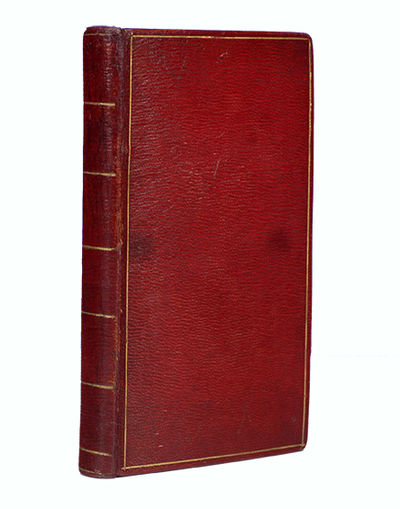 by [Dassier, Jean]
N.P., 1797. Bound in late eighteenth-century full red roan. Covers with gilt single fillet border, smooth spine ruled in gilt, board edges and turn-ins decoratively tooled in gilt, all edges gilt, marbled endpapers. Blank book, interleaved and with thirty-three leaves with sixty-six mounted engravings (front and back of each medal), including thirty-one medals by Jean Dassier of the Sovereigns of England from William I to George II, including Oliver Cromwell (without the medals of the medals for Richard III, Henry VII, and Henry VIII), as well as medals of George III (by Lewis Pingo) and Queen Charlotte (by John Kirk). A fascinating collection. "Having being presented to Queen Caroline, perhaps through the good offices of Wake, Dassier set out proposals for a set of thirty-three medals of English sovereigns from William I to George II, to whom the series was dedicated. Based on engravings by George Vertue for Paul Rapin de Thoyras's History of England, these were advertised in the prospectus published in 1730 for purchase by subscription at 6 guineas for sets in copper and at 15 guineas for silver. During his second stay in England Dassier also planned, according to Vertue, to engrave many remarkable persons noted for great Actions in the government of this nation in Times passd. and learned men of all degrees lately or formerly or of the present time which he proposes to grave at his own expense. Medals of Milton, Bacon, and Selden were included in this set. Together these two medallic series belong to those series of historicizing portraits in different media that were being formulated at Stowe and elsewhere during the 1730s to represent figures from the national past" (ODNB). These engravings are most likely cut from An Explanation of Dassier's Medals of the Sovereigns of England, a series of six engraved plates of the Kings and Queens of England, by Pye, c. 1773, the final plate with additional medals of George III and Queen Charlotte, followed by 7 pages of explanatory text, reduced landscape folio. (Inventory #: 3684)
$1,750.00 add to cart or Buy Direct from
Whitmore Rare Books
Share this item