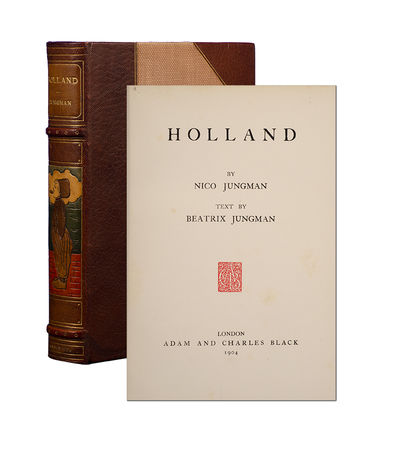 by Jungman, Nico [&] Beatrix
London: Adam and Charles Black, 1904. First edition. Near Fine. Bound ca. 1904, most probably by Birdsall of Northampton, in three-quarter dark brown morocco over light brown buckram boards ruled in gilt. Spine with two raised bands decoratively paneled in gilt. The largest panel (3 3/4 x 1 1/2 inches) with a little Dutch boy smoking a cigar onlaid in various colored morocco. The image has been inspired by the color frontispiece, "A Boy Smoking, Volendam". Marbled end-papers, top edge gilt.Octavo (8 13/16 x 6 1/4 inches; 224 x 160 mm.). Collating [ix], [i, blank], 212. Seventy-six color plates, all with printed tissue guards. Some light scattered foxing throughout, otherwise fine. A beautiful example of work by the Birdsall bindery. The roots of Birdsall of Northampton "stretch back to the early eighteenth century but it was in 1792 that John Lacy's Northampton bindery was acquired by William Birdsall, continuing in his family until 1961... In Birdsall's heyday, Gerring (Notes on Bookbinding, 1899) reported a staff of 250 engaged in making ladies handbags, fancy boxes, and stationary; as well as all types of bookbinding. The firm seemed always ready to experiment and careful records and samples were kept by Richard Birdsall, great-great-nephew of the founder, until he died in 1909... The firm's collection of over 3,000 finishing tools passed to the University of Toronto" (Maggs, Bookbinding in the British Isles II, #262, and #321). "Birdsall's is notable for the high quality of their leathers and finishings, as well as for the inventive style of their 'inlaid pictorial bindings'" (Chevalier Collection, Christie's November 9, 1990). Nicolaas Wilhelm Jungman (1872-1935) was an Anglo-Dutch painter of landscapes and figural subjects, a book- illustrator and decorator. Jungman was born in Amsterdam, where he was apprenticed to a church painter, and studied at the Rijksakademie. He came to London about 1893 on a scholarship and became a naturalized British subject, returning to the Netherlands frequently, to paint in Volendam. In 1900 Jungman married Beatrix Mackay with whom he had three children, Loyd, Zita (1903-2006) and Teresa (nicknamed "Baby") (1907-2010). As a naturalised Briton, he was interned by German forces during the First World War, which led eventually to the break-up of his marriage. Jungmann made several painting excursions to Brittany and Holland with his friend and fellow-painter Charles W. Bartlett. He illustrated topographical books on Holland (1904) and Norway (1905) for which his wife Beatrix wrote the text, as well as one on Normandy (1905) with a text by Geraldine Edith Mitton. Near Fine. (Inventory #: 3568)
$1,250.00 add to cart or Buy Direct from
Whitmore Rare Books
Share this item