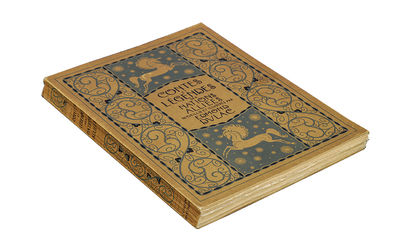 by [Edmund Dulac illustrator]
Paris: L'Édition D'Art H. Piazza, 1917. First edition in French. One of 1000 numbered copies signed by Dulac, this being copy 574. Publisher's original pictorial wrappers designed by Dulac. Miniscule wear to spine extremes. Fifteen mounted color plates with captioned tissue guards, and ten decorated initials, ten tailpieces, and decorative bands to text designed by Dulac. An exceptionally Fine copy. First edition in French of Edmund Dulac's Fairy Book: Fairy Tales of the Allied Nations (1916), with the same number of color plates as the first English edition but with the addition of initials, tailpieces, and decorative bands by Dulac exclusive to this issue. "The tales of this book, both written and illustrated by Dulac, were drawn from the folklore of Russia, England, Flanders, Belgium, Italy, France, Ireland, Serbia, and Japan. Dulac was able to employ the full scope of his versatility in creating a national mood in each illustration. During this period of his work, Dulac had immersed himself in the artistic traditions of folklore" (Hughey). (Inventory #: 3635)
$1,500.00 add to cart or Buy Direct from
Whitmore Rare Books
Share this item