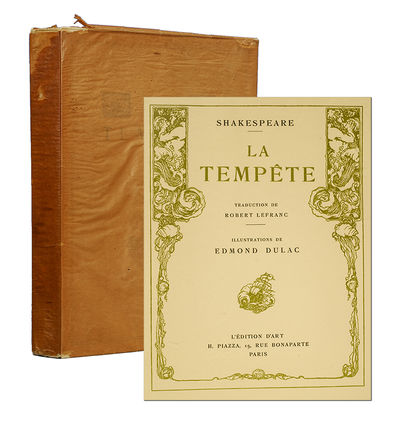 by Shakespeare, William. Edmund Dulac (illustrator)
Paris: L'Édition D'Art H. Piazza, 1912. First edition in French. First edition in French under this title, a translation of Shakespeare's play. Publisher's original wrappers with sea nymph vignette, in original glassine dust jacket. Aside from a few small nicks to the glassine jacket, this is a Near Fine copy. Quarto (11 7/8 x 9 1/4 in; 303 x 236 mm). 108, [2] pp with decorative wave borders. Forty mounted color plates with line borders, and captioned tissue guards. Title-page with Dulac-designed borders and galleon vignette. Five section headpieces, tailpieces, including one tailpiece of an owl at end of Act Five not found in earlier French or English editions. The companion volume to Dulac's L'Ile Enchanteé. Conte d'Apres Shakespeare (1908), the latter a prose adaptation of Shakespeare's The Tempest, the volume under notice a strict French translation of that play. "The Tempest was Dulac's second major gift book work...[He] can be considered a perfect illustrator for Shakespeare because of his tendency to always mix in with serious pictures some humorous ones, just as Shakespeare inserted scenes of comic relief between his serious ones. Also, like Shakespeare, who is sometimes believed to have been a sailor because of his knowledge of seagoing lore, Dulac shows sensitivity to the nuances of the sea with his beautiful greens and blues and patterns of surf and rock" (Hughey). Hughey 19y. (Inventory #: 3633)
$650.00 add to cart or Buy Direct from
Whitmore Rare Books
Share this item