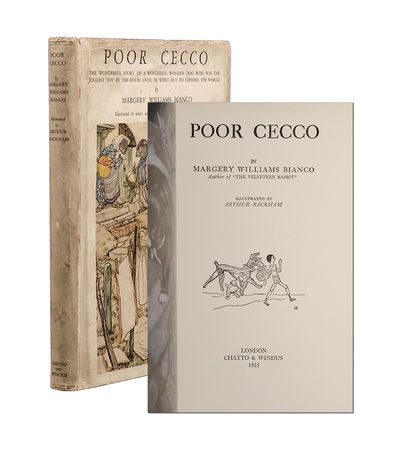 by [Arthur Rackham] Bianco, Margery Williams
London: Chatto & Windus, 1925. First English trade edition (no English limited edition was issued). Quarto (10 x 7 1/4 inches; 253 x 186 mm.). Collating 175, [1]. Original orange cloth pictorially stamped and lettered in red on front cover and lettered in red on spine. Blank endpapers. Seven mounted color plates and twenty-four drawings in black and white. A Very Good copy in the scarce original color pictorial dust jacket (jacket complete but with some repairs). The text, with the same plates and drawings, first appeared in magazine form in Good Housekeeping, beginning in May 1925. "The Velveteen Rabbit (1922), [Margery Williams Bianco's ] first children's book, was illustrated by William Nicholson. It was followed by another book about a toy, The Little Wooden Doll (1925), for which the illustrator was her own daughter Pamela...Margery Williams Bianco's third children's book, the much admired Poor Cecco (1925), is the story of a wooden toy, a 'loose-jointed thing like a dog', who gets out of the toy cupboard and has a lengthy series of adventures with his friend Bulka the rag puppy. The first edition was illustrated by Arthur Rackham" (The Oxford Companion to Children's Literature). (Inventory #: 3717)
$750.00 add to cart or Buy Direct from
Whitmore Rare Books
Share this item