Brighton and its Coaches 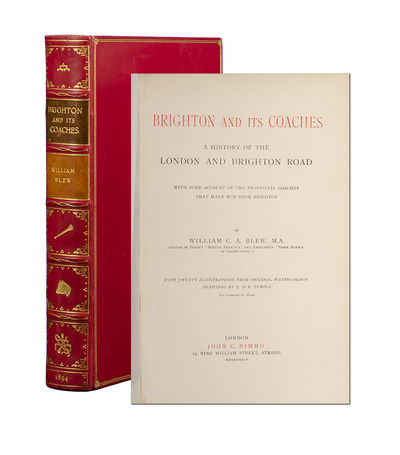 by Blew, William C.A.
London: John C. Nimmo, 1894. First edition. Bound ca. 1960 in full red calf, covers with double gilt-ruled borders, spine with five raised bands, decoratively tooled in gilt in compartments, green and tan calf labels lettered in gilt, top edge gilt, gilt board-edges and turn-ins, red and white 'Cockerel' end-papers. Royal octavo (10 x 6 3/4 inches; 255 x 170 mm.). Collating xxii, 354, with twenty hand colored lithograph plates. A fine copy. "Fifty-two years have passed since the opening of the London and Brighton railway caused the break-up of what was perhaps the best-found, the most popular, and the busiest coach-road out of London. He, therefore, who can remember even the last flicker of the expiring embers of the Coaching Era must have exceeded that uncertain period of life known as middle age; while, if we would hear from living lips of the golden age of Brighton stage-coaching, as it was from, say, 1825, we must listen to an octogenarian. But these old-world coachmen, alas! are growing fewer in number; and their memories, once so amply stored with reminiscences which would now be priceless, from the standpoint of the coaching historian, are not quite so retentive as they once were. Moreover, these ancient artists are difficult to find; and even they cannot convey one back to the earliest days of the Brighton road -- that is to say, to the middle of the last century. In venturing to put forth, therefore, some account of the Brighton road, so far as it has been possible to glean its history, I do not claim to do any more than give the dry bones of stage-coaching. It has been my good fortune to converse with more than one of those who drove on the Brighton road in its best days, and their sayings and experiences are incorporated in the following pages" (Preface). Beautifully colored by hand and finely bound, the present work sought to preserve an important part of British life before it fully faded. (Inventory #: 3570)
$650.00 add to cart or Buy Direct from
Whitmore Rare Books
Share this item