FLYING THE SR-71 BLACKBIRD: IN THE COCKPIT ON A SECRET OPERATIONAL MISSION 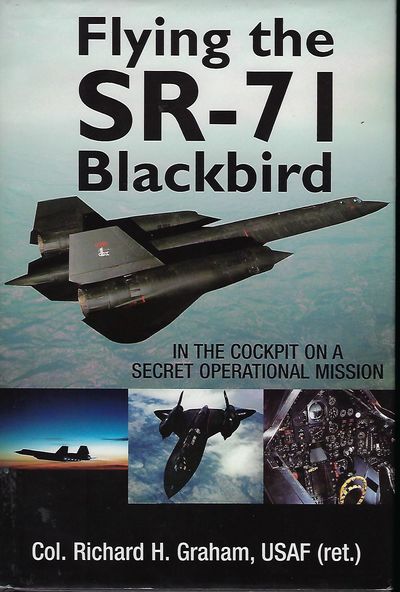 by GRAHAM, Col. Richard H.
[Minneapolis, Minnesota]: Zenith Press, 2008. First Edition. Signed presentation from Graham on the front endpaper: "To Joe Sheppard, Thanks for being a fan of the SR-71 Blackbird. All the best! Rich Graham." Colonel Graham was selected to enter the SR-71 strategic reconnaissance program in 1974 at Beale AFB, California. After several years as a crew member, he was further selected to become an instructor pilot, and in 1978 was selected as the Chief, Standardization/Evaluation Division, which included the SR-71, U-2 and T-38 aircraft. Graham was the 1999 recipient of the University of Nebraska's William F. Shea Award for his distinguished contribution to aviation, and is a Distinguished Lecturer for the American Institute of Aeronautics and Astronautics. Signed copies of this title are uncommon. 8vo., black cloth in dust jacket; 288 pages. Illustrated. Foreword by Aviation Historian Jay Miller.. Very Good (covers nice but for small scratch on front cover; contents clean & tight); very nice d/j. A nice copy. (Inventory #: 57015)
$125.00 add to cart or Buy Direct from Antic Hay Books
Share this item
Antic Hay Books
Offered by

Athens : The University of Georgia Press , 1979
(click for more details about DELTA: THE HISTORY OF AN AIRLINE)
View all from this seller>