Nine Lives Are Not Enough [*SIGNED*] 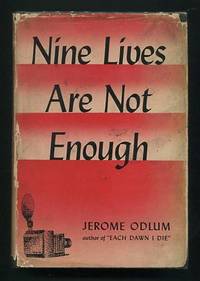 by Odlum, Jerome
New York: Sheridan House. Good in Fair dj. (c.1940). First Edition. Hardcover. [moderate shelfwear, cloth slightly worn through at a couple of corners, spine turned, soiling and age-toning to edge of text block; jacket heavily worn and soiled, split almost the entire length of front hinge, several scrape-tears to rear panel, dampstain along bottom edge of rear panel, etc.]. INSCRIBED -- "Best wishes to my / friend and banker / George Hellen" -- and SIGNED by the author on the ffep. Mystery novel set in Minneapolis, with the protagonist, "a canny, tough and ready newspaperman, a fighting Irishman, who has just enough softy in him to make him goofy about a lady in distress." (Not concidentally, Minneapolis was the hometown of author Odlum, where he had once been a newspaper editor.) This dude, Johnny O'Sullivan, is what's known as a "combination man," meaning that "he gets both the story and the pictures [photographs] on a dirty assignment where only one man can operate." The identically-titled film version, released by Warner Bros. in 1941, starred that other canny, tough and ready fighting (quasi-)Irishman (from Illinois), Ronald Reagan. Signed by Author . (Inventory #: 25894)
$200.00 add to cart Available from ReadInk
Share this item
ReadInk
Offered by

by Vieira, Mark A.