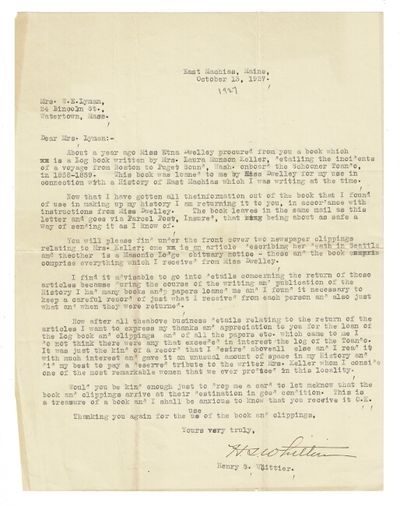 by Whittier, Henry S[mith]
8½" x 11"; includes 4 news clippings; one from the Union-Republic, three on the Kellers, and 5 carte-de-visites of the Munson family 2½" x 4," plus 2 of the Keller family 2½" x 4," and 1 of Munson Millinery store. Also, one studio photograph of "Grandma Lucy Gardner's Brother & family-Josiah Hill Munson," 8" x 10" mounted on board. Very good. This collection, which includes famliy photographs, concerns the voyage of the Schooner Toando out of East Machias, Maine, and its story used by historian Henry S. Whittier in writing his history of East Machias. Henry Smith Whittier (1872-1941) was born in East Machinas, and spent thirty years in the Navy. After his retirement he became interested in the history of East Machinas and in the genealogy of his family. He wrote a series of articles titled "East Machias, 1765-1926" that was published by the Union-Republican in Machias. [ref: Talbot-Whittier Family Papers, Folger Library, at U of Maine]. His letter thanks Mrs. Lyman for the loan of the log book written by Laura Munson Keller detailing the incidents of a voyage from Boston to Puget Sound, Washington, aboard the Toando in 1858 to 1859. East Machias, on the East Machias River, is a former lumber and shipbuilding center. Laura Munson Keller (1837-1877), wife of Captain Albert W. Keller, was a remarkable woman who accompanied her husband on his mercantile voyages and was once marooned with him for two months in the Sandwich Islands. Her inspiration was credited with saving the group who had to salvage parts of the wrecked ships to construct a new smaller vessel to use in their escape. (Inventory #: 57081)
$115.00 add to cart or Buy Direct from
Rulon-Miller Books
Share this item

Dr. Channing's last address, delivered at Lennox, on the first of August, 1842, the anniversary of emancipation in the British West Indies

Boston : Oliver Johnson, Court Street , 1842
(click for more details about Dr. Channing's last address, delivered at Lennox, on the first of August, 1842, the anniversary of emancipation in the British West Indies)