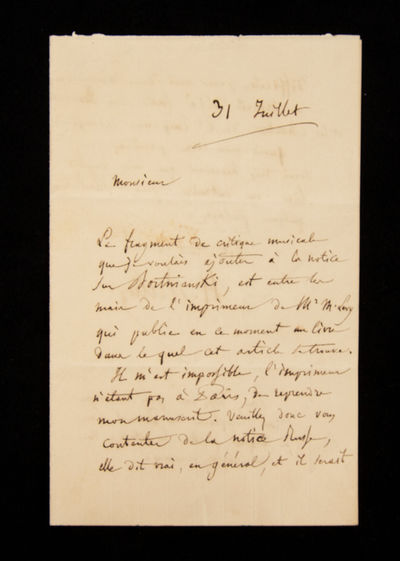 signed
by BERLIOZ, Hector 1803-1869
2 pp. of a bifolium. Octavo. Dated "31 Juillet," no year. To an unidentified male correspondent. On lined paper. In French (with translation). Berlioz apologizes for not being able to edit his article on Bortnyansky, with which he hopes his correspondent will be satisfied. "The fragment of musical criticism which I wanted to add to the item on Bortnianski is in the hands of Mr. M. Levy's printer who is at present bringing out a book which contains this article. It is impossible for me - since the printer is not in Paris - to rework my manuscript. Therefore be good enough to be satisfied with the Russian article; it is accurate, on the whole, and it would be difficult for me to redo a study on Bortnianski and Emperor of Russia's singers that is already done." The composer/critic goes on say that he would be happy for extracts of the article to appear in L'Illustration and, in a postscript, asks his correspondent to send him a copy of the periodical in which his article appears. Slightly worn; creased at folds and very slightly overall. Dmitri Stepanovich Bortnyansky (1751-1825) was a Ukrainian singer, composer, and music director active in Russia. "During the 19th century Bortnyansky choral concertos and hymns gained popularity across Western Europe; some copies of concertos preserved in the library of the Hofkapelle in Vienna date from as early as 1780. Berlioz, who heard the concertos in Russia in the 1840s, praised the 'incredible freedom' of their approach to choral sonority (Les soirées de l'orchestre, Paris, 1852) and included Bortnyansky's music in several of his own concerts in Paris." Marika Kuzma in Grove Music Online "[Berlioz] stands as the leading musician of his age in a country-France-whose principal artistic endeavour was then literary, and in an art-music-whose principal pioneers were then German. In many senses the Romantic movement found its fullest embodiment in him, yet he had deep Classical roots and stood apart from many manifestations of that movement. His life presents the archetypal tragic struggle of new ideas for acceptance, to which he gave his full exertions as composer, critic and conductor. And though there were many who perceived greatness in his music from the beginning, his genius only came to full recognition in the 20th century." "Berlioz's views were presented regularly to readers of the Paris press ... He published three collections of criticism: Les soirées de l'orchestre(1852), Les grotesques de la musique (1859) and A travers chants(1862). In his feuilletons he wrote of new operas and singers ... ; his opinion on momentous occasions was of crucial interest, for example at the première of Le prophètein 1849. He reviewed most of the concerts of the Société des Concerts; he wrote of new instruments and musical gadgets, of his own impressions of music abroad, and of important musicians visiting France; he wrote biographical notices of Gluck, Beethoven, Spontini, Méhul and himself; he wrote fiction and fantasy, often with a critical purpose; he wrote serialized treatises on orchestration and conducting. There are, in short, few facets of musical practice of the time untouched in his feuilletons ... In general Berlioz's opinions are trenchant and clearly expressed." Hugh Macdonald in Grove Music Online. (Inventory #: 35434)
$3,135.00 add to cart or Buy Direct from
J. & J. Lubrano Music Antiquarians
Share this item