A Trio of Correspondence Relating to Whig Politics in Pennsylvania 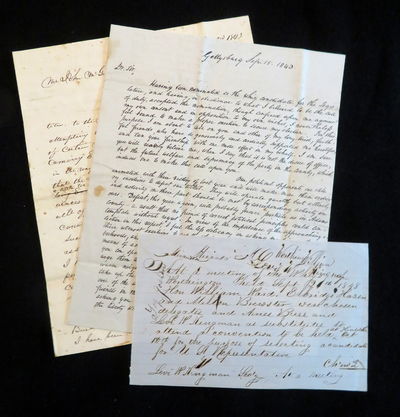 by Col. John Henry McClellan & James Cooper
Gettysburg, PA, 1843-1848. General wear. . A grouping of two letters written to a John A. McGinley, Esq. of Adams County, PA and short announcement. The first letter, August 20, 1843, is from John H. McClellan, a prominent business man of Gettysburg, PA, who had been appointed treasurer of Adams County in 1840 to serve out another individual's term. In 1843, he was running to be officially elected as the Adam County's Treasure, a pursuit he would eventually succeed in, requesting his support. A good portion of the letter is pent on condemning the "clique" of current management among the Whig party, and his hope that upon the election, new blood would be infused into the party's leadership. The next letter, September 15, 1843, from James Cooper of Gettysburg, PA, asking for McGinley's help in getting the voters of Adams County to vote for him in the upcoming election for the Pennsylvania House of Representatives. Cooper was an American Whig politician and lawyer, who is one of the few representatives who first served as Representative to US Congress prior to serving in their own state's House of Representatives. In this letter he recounts his reluctance acceptance of the Whig party's nomination for State Representative, but felt he must out of duty to the country and his fellow Whigs. The last item in this mini collection is short announcement note from September of 1848 naming the delegates for the 1848 Whig State Convention to be held on October 10, 1848 at Hinsdale. The purpose of this convention was to nominate Whig party candidates for US Representative from PA. The delegates sent were: William Ward, Elbridge Hasen, and Milton Brewster with Amos Burs and Levi W. Kingman as substitutes. Letters measure 9 3/4" x 7 3/4".Below are some excerpts from the two letters:Permit me to draw your attention to the movements of some of our town folks in attempting to forestall public oppinion [sic] in favor of certain men to file offices of high trusts at the coming election for their own particular convenience in the way of accommodations, its well known that the same clique, has had the management of affairs a little too long and their dictation have rot evil consequences among the whigs... I hope the good foreign people of Adams county will permit them no longer to offer their insults and at the coming contest, will boldly stand out against any such fraction, and build up such a ticket as they know to be good and true to the cause... I have been urged by a member of the people from the county to offer for the treasuryship [sic] and I am now determined to make the attempt, and I hope the good people of Hamilton Township will sustain me, and should you be a delegate from that quarter, I most sincerely hope you will give me your support and your influence in the matter will greatly oblige. - August 20, 1843, John H. McClellan to John A. McGinley, Gettysburg, PAHaving been nominated to the whig candidate for the legislator, and having, in obedience to what I believe to be the call of duty, excepted the nomination, though conferred upon me against my own consent and in opposition to my own wishes, I nevertheless feel bound to make a proper extension to secure my election. For this purpose I am about to call on you and others of my long-tired, faithful friends, who have so generously and cordially supported me heretofore, and tax your friendship with one more effort in my behalf. I am sure you will readily believe me, when I say that it is not the desire of office, but the future welfare and supremacy of the party in the county, which induces me to make this call upon you. Our political opponents are still animated with their victory of last year and will make more than ordinary exertions to defeat our ticket. They will operate quietly but actively, and activity on their part should be met by corresponding activity on ours. Defeat, this year again, will probably forever prostrate us in Adams County... see the voters and urge them to attend the election themselves and take with them their lukewarm neighbors. If possible get the active young men of the township to take up the matter, urge them to attend at the polls early and take care of wooing voters. - September 15, 1843, James Cooper to John A. McGinley, Gettysburg, PA