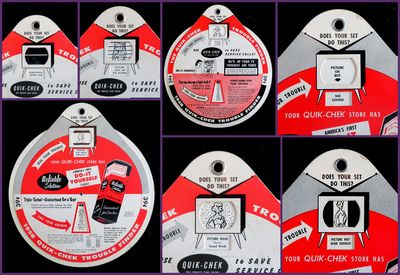 Reliable Selection, 1958. General wear. . A volvelle designed by the Reliable Selection Company that allowed the user to diagnose what Radio Tube within their TV was malfunctioning as "80% of your TV troubles are tubes. Save money on unnecessary service calls with this amazing dial wheel." A TV radio tube would translate the received signal into a picture on the screen as well as the audio, and generally speaking their were a variety of tubes housed within a television that translated different parts of the signal, be it sound or visual. This volvelle had 28 (14 on each side) ways a TV could be malfunctioning due to a faulty tube. The volvelle had three die cut openings: the first is in a shape of a TV that provides an illustration of the type of error one might see on the screen, such as 'snow' or wavy lines, the second opening was immediately below that and had a written description corresponding to the above illustration of not only how the screen was malfunction, but possible corresponding sound issues as well, the third and last opening was on the bottom have of the volvelle, and listed the corresponding tubes that might need to be replaced to fix the malfunction Printed in three colors withdetailed instructions on using the volvelle and changing a TV tube. It proclaims, "Can you change a light bulb?... Then you can change a tube!". Accompanying this text are two illustrations, one on each side. The first one is of the box the tubes come in, and the second is of what looks like to be a type of vending machine, which has emblazoned on it "Do it Yourself! TV Radio Tubes Quik-Chek Tester". At the top of the wheel is hole so that one could hang it on the wall. Measures 7 1/4" (diameter). (Inventory #: 20200158)
$65.00 add to cart or Buy Direct from Eclectibles
Share this item