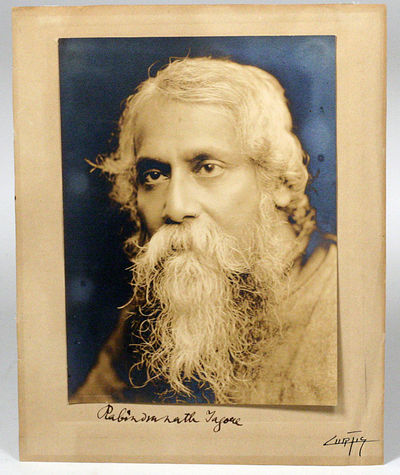 by TAGORE, RABINDRANATH; CURTIS, EDWARD
Seattle: Edward Curtis, 1913. First edition. nb. Very Good. STUNNING GOLD-TONED SILVER PRINT OF RABINDRANATH TAGORE BY EDWARD CURTIS, SIGNED BY BOTH TAGORE AND CURTIS. An outstanding union of photographer and subject: Edward Curtis, one of America's most sensitive and accomplished portrait photographers, and Rabindranath Tagore, the great Bengali poet, composer, playwright, and painter, "generally regarded as the outstanding creative artist of early 20th-century India." Edward Curtis, known primarily for his lifelong project to document and preserve the traditions of Native Americans through photography, became a master at representing people who were unlike himself. Striving for more than a just a flat visual record, he tried (in his own words), to take "a picture that will show the soul of the people". Through his creative composition and innovative photographic techniques, Curtis helped his subjects come alive in the images. In fact, "frequently Curtis's human subjects are so powerfully present in the picture that they seem to return the observer's gaze." (Mark Gidley, Britannica). In Curtis's photograph of Tagore, the celebrated poet indeed has an intense "returning gaze" while at the same time appears somewhat ethereal and unquestionably noble. It's a beautiful image that endures as a work of art as well as a profound portrayal of its subject. Tagore was awarded the 1913 Nobel Prize in Literature - the first non-European to do so - and subsequently spent "long periods out of India, lecturing and reading from his work in Europe, the Americas, and East Asia and becoming an eloquent spokesperson for the cause of Indian independence" (ibid.). This photo, c.1913, was taken at Curtis's studio in Seattle during Tagore's visit to the United States. Signed "Rabindranath Tagore" in strong dark ink on original mount beneath the photo and "Curtis" on the lower right of the mount. With Curtis's studio stamp at the bottom left of the image. Size: Image = 6x8 in.; with original mount = 8x10 in. Seattle: c.1913. Some spots of oxidation in black background. A remarkable photograph with tones extraordinarily rich; extremely rare signed by both Tagore and Curtis. (Inventory #: 2374)
$12,500.00 add to cart or Buy Direct from
Manhattan Rare Book Company
Share this item
Manhattan Rare Book Company
Offered by

New York : Charles Webster and Co , 1885
(click for more details about Personal Memoirs of U.S. Grant)
View all from this seller>