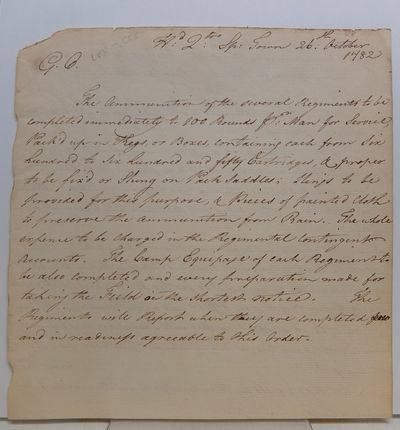 by AMERICAN REVOLUTION
Spanish Town, Jamaica, 1782. unbound. 2 pages (front and back), 7.75 x 7.75 inches, Head Quarters, Spanish Town, Jamaica, October 26, 1782, a rare General Order allocating munitions to British soldiers in the defense of Spanish Town, in part: "...The ammunition of the several Regiments to be completed immediately to 200 rounds per man for service, packed up in kegs, or boxes, containing each from six hundred to six hundred and fifty Cartridges...to be fixed or slung on Pack Saddles. Things to be provided for this purpose...pieces of painted cloth to preserve the ammunition from Rain. The expense to be charged in the Regiment contingent accounts. The camp equipage of each Regiment to be also completed and every preparation made for taking the Field in the shortest notice. The Regiments will report when they are completed and in readiness agreeable to this Order." This document was issued one year after Yorktown and six months after the British victory at the Battle of the Saints, April 12, 1782. With the war having moved from North America to the West Indies, the British had to encounter a joint French-Spanish fleet whose intention was to conquer Jamaica. The Battle of the Saints is extremely important in naval history; by far the biggest fought at sea in the American War of Independence. As can be seen by this document, the British Regiments in Spanish Town were in a constant state of High Alert, a condition that lasted until November 30, 1782 when England and the United States signed the preliminary Articles of Peace. On verso: Extraordinary Manuscript Document, the proper form to be made-use-of "by Officers when they apply to their respective Commanding Officers for leave to sell their Commissions." In small part: "I beg you will obtain for me His Majesty's Consent to the sale of my Commission of________and it is my intentions to hereby resign all rights and position to any future rank or Promotion in the Army, and I do further declare, and certify, upon the Word and Honor of an Officer and a Gentleman, that I have not demanded, or accepted, neither will I demand or accept_______more than the sum of_____Pounds Sterling, being the price limited or fixed by His Majesty's Regulation, as the full value of the said Commission." Undoubtedly, any British Officer filling out this form in 1782 could only have been a veteran of the disastrous American Revolution. Once the sale of his Commission was complete, the former British Officer would take his proceeds and await voyage back to England. Slight chipping along the left edge; still very good condition. (Inventory #: 297374)
$1,350.00 add to cart or Buy Direct from
Argosy Book Store
Share this item