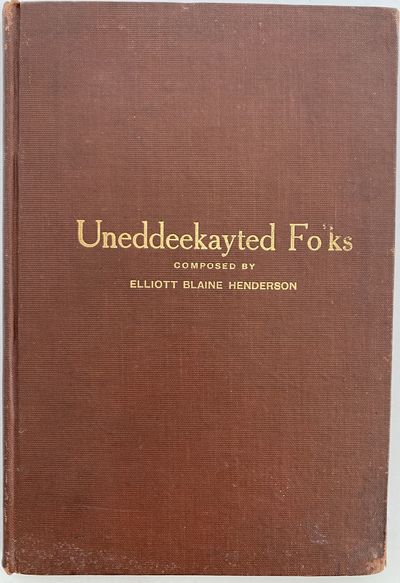 by HENDERSON, Elliott Blaine
No place listed: Elliott Blaine Henderson, 1911. First Edition. Cloth. Very good. First edition.  8vo; 61pp; brown cloth over board, gilt-stamped title and author to front; frontispiece a photographic illustrated portrait on glazed plate; scuffing to head and tail of spine, bumping to cover corners, light crease to fp, chip to top edge title page; very good. Elliott Henderson (1877-1944) was an African American poet from Ohio.  He self-published nine volumes of poetry:  Plantation Echoes, Darky Meditations, Heroes of the Battlefield and Other Poems, Humble Folks, Old Fashioned Black Fo'ks, Polished and Unpolished Diamonds, The Romance of Hannibal, and Soliloquy of Satan and Other Poems.  Most of his poetry is written in a Black vernacular English.  A two page dedication, each with two columns of names, lists people whom Henderson credits with encouraging his literary efforts, including many prominent Ohio public officials, politicians, bankers, physicians, professors, and clergy. (Inventory #: 1159)
$150.00 add to cart Available from
Sandra L. Hoekstra
Share this item

No place listed : Manuscript , 1920
(click for more details about Needlework Notes)
View all from this seller>