The New Album of New York 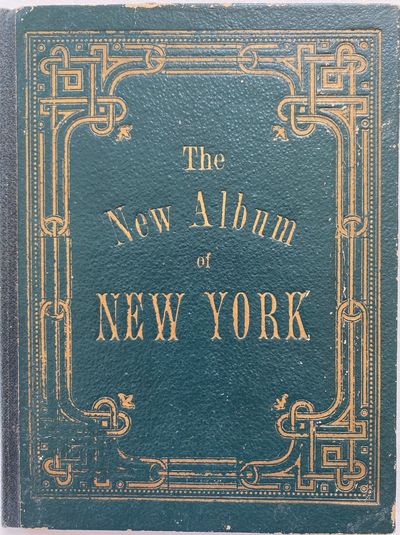 No place listed [Portland, Maine]: No publisher listed [Chisholm Bros.], 1880. Boards. Very good +. [VIEWBOOK] [SOUVENIR] [ADVERTISING]. The New Album of New York, No place, publisher, or date listed [c. 1880s]. 12mo (6 1/4" x 4 3/4"); concertina folded [12 panels]; gilt-stamped pebbled green paper over board, elaborate gilt border with title to front and ad to rear; 12 chromolithographic illustrations in grey, red border to each illustration, printed recto only; scuffing to boards with chipping of edges, chipping of rear pastedown at spine; very good plus.  Only 2 located in WorldCat libraries. Twenty-six grey-tone chromolithograph illustrations mimicking photographs from scenes around New York City on 12 panels in this small souvenir-style leporello.  Each scene has a border in black, white and red with a title.  The first illustration celebrates the "Great Bartholdi Statue, Liberty Enlightening the World.  The Gift of France to the American People"; other illustrations are of major tourist sites around the city.  An Advertisement for "P.H. Vose & Co., Importers of Fine China and Glass, No. 31d Main Street, Bangor, Maine", stamped in gilt on rear board.  This viewbook was likely produced by Chisholm Bros., Portland, Maine, well known for their souvenir books. (Inventory #: 1163)
$100.00 add to cart Available from
Sandra L. Hoekstra
Share this item

No place listed : Manuscript , 1920
(click for more details about Needlework Notes)
View all from this seller>