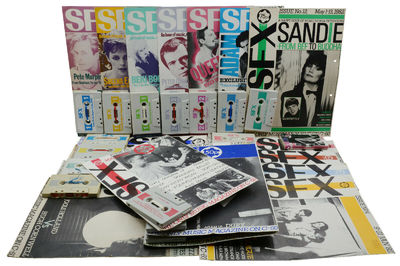 by Bell, Max [Editor]; Martyn Atkins [Designer]
London: SFX Publications Ltd, 1982. Very Good. Issues 1-19 complete. C-60 cassettes twist-tied to an 8-1/4" x 11-3/4" cardboard backing. Very Good overall with light soiling and wear to cassettes and cardboard. Issue #14's cardboard has been trimmed, stapled and used as a cassette case. A few of the twist-ties may not be original. Issues 9, 10, 12, 18, & 19 have two additional punch holes through cardboard. A short-lived experiment in cassette magazine publishing focusing on contemporary British music at the height of the New Wave. SFX managed to cover a lot of musical ground: from the one-hit wonders of the day like Haircut 100 and Funboy 3 to post-punk to Queen, B.B. King, filmmaker Mel Brooks, Motorhead's Lemmy, Phil Collins, Kid Creole, Can's Holger Czukay, and more. Like Australia's Fast Forward, each issue was in a radio show variety format. They had news, interviews, reviews, previews of upcoming albums, unsigned band demos, and occasional features on culture, fashion, and football with three or four commercials per issue. In issue #11 they were able to get Paul McCartney's thoughts on the murder of his former bandmate, John Lennon; a journalistic coup that also allowed SFX's audio format to shine. (Inventory #: 140940254)
$1,200.00 add to cart Available from
Burnside Rare Books
Share this item
Burnside Rare Books
Offered by

The Spirit of Romance