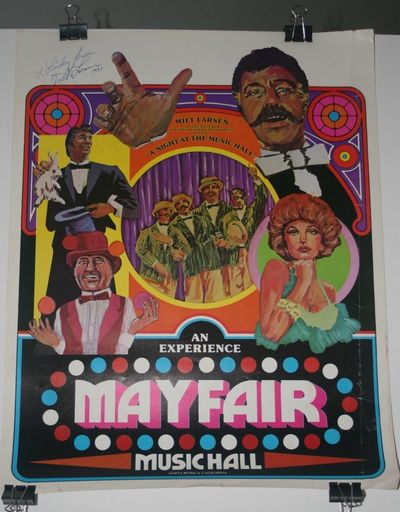 by Larsen, Milt
[ Santa Monica CA ]: Self published, no date. First Edition. Good. First Edition. Poster on glossy paper, pictorial. 21 inches high by 16 1/4 inches wide. This copy INSCRIBED upper left "To Lindy, Milt Larsen, 1991". Seriously creased down the right hand side, overall wear. Still, suitable for framing. And difficult to find SIGNED. At the Mayfair Music Hall. "Writer, comedian, lyricist, theater historian, magician and entrepreneur Milt Larsen was born in Pasadena, California (1931) to William W. Larsen Sr. and Giselle Larsen, both performing magicians and publishers of Genii, the Conjuror's Magazine. Larsen wrote for the audience participation shows Truth or Consequences (1956-1977) and Malibu U (1967). As a lyricist, Larsen collaborated with Richard Sherman in the satirical albums Smash Flops and Banned Barbershop Ballads. Larsen also collaborated with Sherman on the comedy musical Pazzazz! In 1956 Larsen produced the magic review "It's Magic!", which has run annually since that year. In 1963 Larsen founded the Magic Castle in Hollywood. A club for magicians, the Magic Castle is home to the Academy of Magical Arts. In addition to the Magic Castle, Larsen founded the Mayfair Music Hall (1973-1980), the Variety Arts Theatre in Los Angeles (1977-1990), and the Society for the Preservation of Variety Arts (1975-1990). Larsen has also served as a consultant and actor in Hollywood films, has written joke books and books on magic. In 2007 Milt and his late brother, Bill, received a star on Hollywood's Walk of Fame." (UC Santa Barbara Library finding aid). (Inventory #: 28056)
$138.00 add to cart or Buy Direct from Kuenzig Books
Share this item

The Darning Needle, and other stories. / By Hans Christian Andersen, and others

by Andersen, Hans Christian; and others

Boston [Massachusetts] : J. E. Tilton and Company , 1867
(click for more details about The Darning Needle, and other stories. / By Hans Christian Andersen, and others)

London and New York : George Routledge and Sons , 1885
(click for more details about ALMANACK for 1885)
View all from this seller>