William H. Crawford’s Original Appointment as Secretary of War, Signed by James Madison as President and James Monroe as Secretary of State The earliest Cabinet-level appointment known to have ever reached the market, and a consequential one, coming on the heels of the Treaty of Ghent and end to more than a decade of European hostilities. 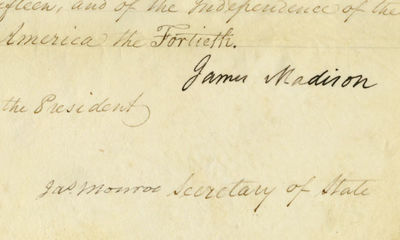 01/08/1815. James Monroe|James Madison William H. Crawford was U.S. ambassador to France during the negotiations to end the War of 1812. During those negotiations, he was responsible for superintending the American consuls in Europe and keeping them informed of developments. He was also an important negotiator from a distance. He was called home and appointed Secretary of War by President James Madison on August 1, 1815, succeeding James Monroe. Crawford served in the post about a year, and was then named Secretary of the Treasury. When Monroe entered the White House, he continued Crawford in office, and Crawford remained at Treasury until the end of Monroe’s administration.  Crawford's term as Secretary of War was short but consequential. He presided over the military standing down after years of bitter conflict and also put reform at West Point, a crucial training element in the US arsenal, at the top of his agenda.To date, just 608 people have been named to a presidential cabinet post in the entire history of the United States. Of these, 91 have been Secretaries of War or Defense (the same post, but with a name change in 1947). But presidents have signed untold hundreds of thousands of appointments for military officers, State and Treasury Department posts, and all manner of positions, so any document actually appointing a Cabinet member is extremely uncommon. We have had just three, and seen barely a handful of others, in our three decades in this field.But the problem of rarity becomes more than acute when looking at the first four administrations. When President James Madison appointed William H. Crawford Secretary of War on August 1, 1815, he became just the 36th man ever named to a presidential cabinet and the 9th Secretary of War. Diligent research going back 40 years fails to disclose even one presidential cabinet appointment document for one of the 35 men to serve in cabinets before Crawford having reached the market; nor in fact could we determine the location of any possible survivors.This is, therefore, the earliest cabinet appointment document to reach the market.Document signed, by President Madison and Secretary of State Monroe, Washington, August 1, 1815, appointing Crawford Secretary of War, and stating: “That reposing special trust and confidence in the patriotism, integrity and abilities of William H. Crawford of Georgia, I have nominated, and by and with the advice and consent of the Senate, do appoint him Secretary for the Department of War…” Treasured by the Crawford descendants, the Great Seal of the United States is still intact.Many of Crawford’s most significant papers were passed down in his family from generation to generation, their papers largely unexamined. They contain his original appointment documents, manuscripts and documents relating to the War of 1812 (including reports from the U.S. negotiators), and letters of Jefferson, Madison, Monroe, John Quincy Adams, Lafayette and many others. The document offered here is from the Crawford archive, was acquired by the Raab Collection directly from the Crawford family, and has never before been offered for sale. (Inventory #: 10081)
$30,000.00 add to cart Available from Raab Collection
Share this item