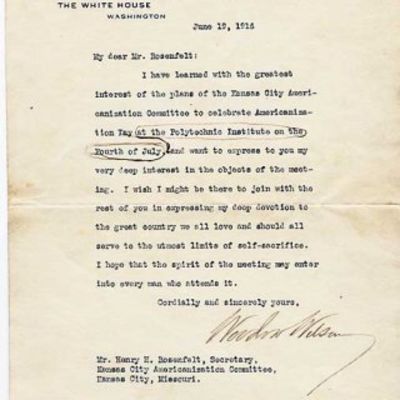 by Woodrow Wilson
19/06/1916. The outbreak of World War I resulted in an upsurge in patriotism in the United States, even though it was not yet enmeshed in the conflict. One manifestation of this was Americanization Committees that were set up to promote American values and the teaching of the English language to immigrants who wanted to become American citizens. In the spring of 1916, President Wilson was running for reelection and was anxious to associate himself with patriotic sentiments. That is why, in response to an invitation from the Kansas City branch of the Committee, he took the rather unusual step of crafting a statement that reflected his personal view of what patriotism meant.Typed Letter Signed on White House letterhead, Washington, June 19, 1916, to Henry H. Rosenfelt. “I have learned with the greatest interest of the plans of the Kansas City Americanization Committee to celebrate Americanization Day at the Polytechnic Institute on the Fourth of July, and want to express to you my very deep interest in the objects of the meeting. I wish I might be there to join with the rest of you in expressing my deep devotion to the great country we all love and should all serve to the utmost limits of self-sacrifice. I hope that the spirit of the meeting may enter into every man who attends it.” Wilson was not the kind of man who flaunted his patriotism and waved it under everyone’s nose. Therefore, statements like this are quite uncommon, this being the strongest such sentiment of his we have had. A few of the words are circled, quite possibly by a newspaper highlighting them for publication. (Inventory #: 3200)
$2,800.00 add to cart Available from Raab Collection
Share this item