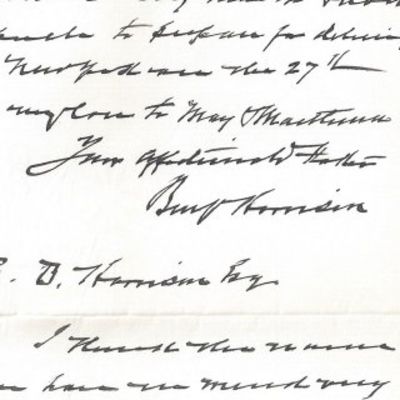 by Benjamin Harrison
16/08/1896. “I had seen in the newspapers a report of the birth of your son but waited official confirmation before extending my congratulations to you and May…. I think the name you have in mind very appropriate.”Benjamin Harrison was born in 1833 in North Bend, Ohio, to a prominent family that had a legacy of political activism. He was the great-grandson of a Signer of the Declaration of Independence, and grandson of the nation's 9th President, William Henry Harrison. Raised on a farm adjacent to his grandfather's vast estate, Harrison believed he was destined for greatness, and ended up following in his grandfather’s footprints as President.In 1853 Harrison married Caroline Lavinia Scott, and they moved to Indianapolis, Indiana, the following year. There he began his own law practice, and got involved in Republican politics. The Harrisons had a son Russell and a daughter Mary.During Benjamin Harrison’s presidency, Russell was his father’s aide and secretary, and Russell’s wife assisted the First Lady from the time Caroline became ill up to the time of her death in the White House in 1892. After the term ended, both the President and son Russell returned to Indiana, where the latter practiced law. Russell served in the Spanish-American War, and was responsible for overseeing the evacuation of Spanish troops from Cuba.On April 6, 1896, the former President married Mary Lord Dimmock, his first wife’s widowed niece and former secretary.  She was 38 years old - 25 years younger than Harrison - and his two adult children, Russell, age 41, and Mary, age 38, did not attend the wedding as they considered the marriage of their father to their cousin inappropriate. This strained the relationship of father and son. Benjamin tried to reconcile Russell to the marriage, and to provide him with help and advice. Their letters from these years shed light on their continuing efforts to understand each other and maintain their family, but because their issues - relationships of fathers to sons, second marriages, family squabbles - are to an extent universal, they are also a moving study in love and estrangement in the human condition. They also, of course, remind us that even great men and women are just people, whose lives resemble our own.In this remarkable letter demonstrating that four month’s after his father’s remarriage, the son has not even notified the father of the birth of his own grandson. Yet at the same time Russell felt it important to maintain family continuity in a way with which Benjamin would be pleased, naming his new son after his father’s beloved grandfather. So here one sees the former President as father and grandfather, connecting generations in the great and historic Harrison family.Autograph letter signed, from his summer home, on his Berkeley Lodge Adirondack letterhead, New York, August 16 1896, with envelope to his son Russell, marked ""personal."" ""Dear Russell, I had seen in the newspapers a report of the birth of your son but waited official confirmation before extending my congratulations to you and May.  I am glad to hear that she had no unfavorable results and that the boy is so strong and healthy.  I had often thought of her and feared the extreme heat might be hurtful. I hope you and she may have great happiness in your son.""I have not had a very restful time here as yet. Our house is not yet fully completed and the work of cleaning up and building walks has kept us all at work.  There too I have an article for the Home Journal to produce and now a speech to prepare for delivering in New York on the 27th.  Give my love to May and Marthena, Your affectionate father, Benj. Harrison."" As a post script, he adds, ""I think the name you have in mind very appropriate.""This unpublished letter was acquired directly from the Harrison descendants and has never been offered for sale before. (Inventory #: 9518)
$7,000.00 add to cart Available from Raab Collection
Share this item