William Henry Harrison Implements the Historic Treaty of Greenville, Which Opened the West to American Settlement At the direction of his superior, General Anthony Wayne, he supplies the Native American coalition - the Six Nations - with subsistence 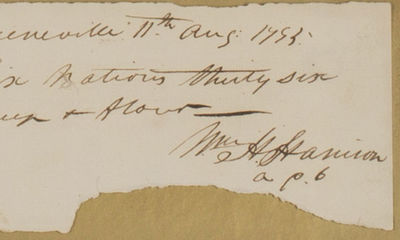 11/08/1795. William Henry Harrison A search of public sale records indicates that the last such document came up in 1992In the 1780s Native American leaders in the Northwest Territory developed a pan-Indian alliance similar to that led by Pontiac in the 1760s. This alliance created a military force very much the equal of that available to the United States on the frontier. A series of battles and lesser skirmishes occurred on the western frontier. In these battles the pan-Indian alliance proved itself quite capable of defeating the new Republic's military, which was mainly composed of militia. In the fall of 1790, militia units led by General Josiah Harmar suffered a humiliating defeat in an attack against members of the Miami tribe in present-day Ohio. Harmar encountered not only the Miami led by the chief Little Turtle and aided by his Shawnee counterpart Blue Jacket, but also many warriors from the Potawatomi, Ottawa, Chippewa, and Delaware tribes.A year later a second military force, under the command of General Arthur St. Clair, experienced the same outcome. St. Clair and his 1,400 militia troops were attacked by a united band of Chippewa, Potawatomi, Ottawa, Miami, Delaware, Wyandot, Shawnee, Mingo, and Cherokee Indians. The surprise attack, which was made with covert British support, cost St. Clair half of his command. The defeat also led the Federal government to reconsider its use of local militias as the primary means of combating Native Americans on the frontier. If the Native Americans' military power was to be matched, Congress would need to finance a professional army to do it.The use of professional soldiers would give the American government the means to match and then exceed the Native Americans, and Congress agreed to a reorganization of the Army. Command was given to General Anthony Wayne, who had established himself as one of the premier officers in the Continental Army during the Revolution. In August 1794 at the Battle of Fallen Timbers, Wayne and his 3,000 soldiers - a force composed mostly of regulars reinforced by some mounted Kentucky militia - decisively defeated the confederated tribes. The battle lasted less than an hour and proved decisive, as unused to a well disciplined enemy, the Indians, who expected to be the ones charging, broke and ran towards British-held Fort Miami. The British at the fort refused to admit their allies, and the British garrison made all efforts not to provoke a war with the Americans. Wayne then destroyed Indian villages and crops nearby. Within three months, the United States signed a treaty with Britain that pledged their evacuation from the Northwest Territory forts by 1796. This left the Native American coalition shattered and severely damaged the inter-tribal alliances.The Native Americans had to sue for peace. General Anthony Wayne officially opened the peace negotiation at Greenville, Ohio, on June 16, 1795, and on August 3 the Treaty of Greenville was signed. Though called the Six Nations, the tribes participating were the Wyandots, Delawares, Shawanees, Ottawas, Chippewas, Pattawatimas, Miamis, Eel Rivers, Weas, Kickapoos, Piankeshaws, and Kaskaskias. The tribes ceded to the United States large parts of modern-day Ohio (effectively opening that territory to American settlers), the future site of downtown Chicago (this was the first time in which the U.S. government staked a claim in Illinois), and the Fort Detroit area. The tribes were also required to allow the people of the United States a free passage by land and by water through their country. Peace had at last been won for the Territory Northwest of the River Ohio.In exchange the tribes received goods in the value of $20,000 (such as blankets, utensils, salt, and domestic animals). It was also the practice for the United States, as an inducement, to give chiefs gifts (such as red leggings and fancy dress coats), and to pay the Indians’ expenses relating to making of the treaty, including travel and subsistence.General Wayne had some bright and rising stars with him at Greenville. With him there were legendary explorers Meriwether Lewis and William Clark, and future president William Henry Harrison, who was Wayne’s aide-de-camp and responsible for seeing to it that his orders were carried out.Isaac Williams was the son of a white trader and a Wyandot woman, and he signed the Treaty of Greenville as a Wyandot delegate. The U.S. government also used his services as an Indian agent and interpreter, which made him a liaison between the Indians and the Americans. Abraham Williams served as an interpreter at Greenville. He also signed the treaty as a Sandusky Delaware Indian, meaning he was also the product of the same sort of mixed marriage as Isaac. The following document was likely addressed to Isaac, but might possibly have been sent to Abraham.Autograph document signed, Greenville, August 11, 1795, just eight days after the Treaty of Greenville was signed, to [Isaac] Williams, implementing the U.S./Indian agreement by providing subsistence. “For the Six Nations thirty six pounds of beef and flour.” Harrison has added the word “Commissary”, indicating that Williams was to get these supplies from the U.S. army commissary.This is only the third Harrison document we can recall seeing on the market that directly relates to implementation of the Treaty of Greenville, the last one having come up in 1992. (Inventory #: 16452)
$8,000.00 add to cart Available from Raab Collection
Share this item