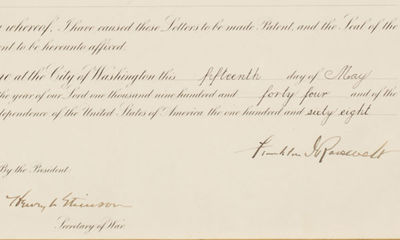 15/05/1944. Franklin D. Roosevelt The only Canal Zone governorship appointment we can find reaching the market in over 40 yearsJoseph C. Mehaffey was a member of the U.S. Army Corps of Engineers. He was first assigned to the Panama Canal Zone in 1911-1912, then was sent to Alaska as Chief Engineer to build bridges, roads, and trails throughout the territory. During World War I he served in the Office of the Chief of Engineers in Washington. After the war he was named professor of practical military engineering at West Point. Returning to Washington, Mehaffey was appointed assistant to the executive officer of the Arlington Memorial Bridge Commission, and in that capacity helped oversee the design and construction of the bridge. He also supervised the 1927 conversion of the attic of the White House into a 3rd floor with bedrooms, bathrooms, and office space.Mehaffey returned to the Panama Canal Zone in December 1929 as assistant engineer, then was reassigned to the Office of the Chief of Engineers. During the New Deal, he had responsibility over WPA projects nationwide, primarily working on airport, beach, pier, playground, and school projects in New York City. One of his major construction efforts was building the East River Drive. As Assistant Administrator for Engineering for the entire WPA, he was very much on President Franklin D. Roosevelt’s radar.With World War II on the horizon, in September 1941 Mehaffey once again was assigned to the Panama Canal Zone as maintenance engineer, building locks and highways. He became a brigadier general in June 1942 and was appointed Panama Canal Zone Governor by President Roosevelt on May 15, 1944. He was promoted to major general a month later. During this period, Mehaffey oversaw operation of the canal while record amounts of traffic moved through it. At one point in 1945, more than 100 ships waited at the eastern entrance to the canal. He retired in 1948, receiving the Distinguished Service Medal for his service as Canal governor.Document signed, as President, Washington, May 15, 1944, appointing “Brigadier General Joseph C. Mehaffey…Governor of The Panama Canal.” The document is countersigned by Secretary of War Henry Stimson, and its blue seal is still intact.Appointments signed by FDR in the last year of his life are quite uncommon, this being the first we have had in many years. But even more significant is the rarity of appointments as Panama Canal governor made by any president. We have never seen another, and a search of public sale records going back over 40 years shows only this very document as having reached the public market. It last sold in 1976. (Inventory #: 16445)
$5,000.00 add to cart Available from Raab Collection
Share this item