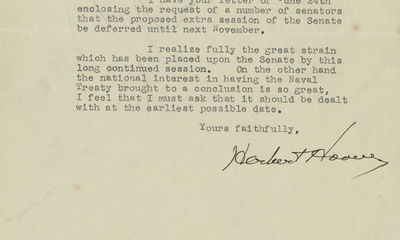 by Herbert Hoover
26/06/1930. The London Naval Conference of 1930, involving the United States, Britain, Japan, France and Italy, was the third in a series of five meetings, formed with the purpose of placing limits on the naval capacity of the world’s largest naval powers. The purpose of the meetings was to promote disarmament in the wake of the devastation of the First World War; they began with the Washington Conference of 1921–22 and concluded with the London Conference of 1935. After an unsuccessful meeting in Geneva in 1927, Great Britain, the United States, Japan, France, and Italy gathered in London in 1930 to make a new attempt at revising and extending the terms of the Five Power Treaty of 1922. In 1927, Great Britain and the United States could not agree on naval cruiser limits; however, representatives of the two governments continued to work on a compromise measure. By 1930 both sides were anxious to reach a deal to avoid an all out arms race and, importantly, forced their naval officers to take a back seat to their diplomats in the negotiations. The result was the Treaty for the Limitation and Reduction of Naval Armament, signed April 22, which regulated submarine warfare and limited naval shipbuilding.President Hoover favored the treaty, but some naval officers opposed the limitations, and they had friends in Congress. Rather than oppose the treaty outright, their strategy was to postpone ratification until they could build up sufficient support to kill the treaty (as had been done with the Versailles Treaty).Typed letter signed, as President, on White House letterhead, June 26 1930, to Sen. George H. Moses, refusing a postponement, and insisting on prompt consideration of the treaty. “I have your letter of June 24th enclosing the request of a number of senators that the proposed extra session of the Senate be deferred until next November. I realize fully the great strain which has been placed upon the Senate by this long, continued session. On the other hand, the national interest in having a Naval Treaty brought to a conclusion is so great, I feel that I must ask that it should be dealt with at the earliest possible date.”The U.S. Senate approved the treaty in July of 1930 and ratifications were exchanged in October. (Inventory #: 16266)
$2,000.00 add to cart Available from Raab Collection
Share this item