Robert Kennedy Seeks to Document Camelot: “The years in which John Kennedy was active” He is pleased that former U.S. Ambassador to the Soviet Union, Lewellyn Thompson, who was instrumental in resolving the most dangerous moment of the Kennedy Administration, the Cuban Missile Crisis, has given an oral history on those days. 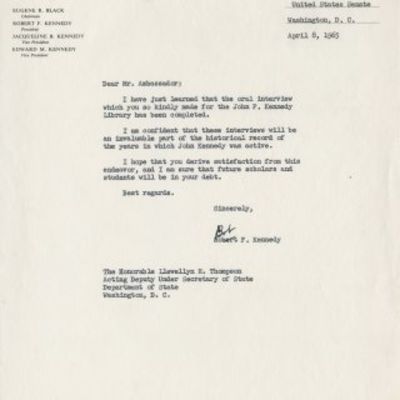 8/4/65. Robert Kennedy He writes, as the Kennedy family starts to collect materials for the planned John F. Kennedy Library, “I am confident that these interviews will be an invaluable part of the historical record…”Lewellyn E. Thompson was one of the most important American diplomats of the 20th Century.  He was the United States Ambassador to the Soviet Union at the height of the Cold War, serving two separate tours in the administrations of Presidents Dwight D. Eisenhower, John F. Kennedy, and Lyndon B. Johnson, and then acting as advisor to Richard M. Nixon.  Few Ambassadors faced as many crises as Thompson did in Moscow - the shooting down of a U.S. U-2 reconnaissance aircraft over Russia, the great confrontation between the U.S. and Soviet Union over Berlin and the building of the Berlin Wall, very difficult summits between Soviet Premier Khruschev and Presidents Eisenhower and Kennedy, the August 1968 Soviet invasion of Czechoslovakia, and tensions over the Vietnam War. But there were also steps toward better relations. At Thompson's suggestion, Nikita Khrushchev became the first Soviet leader to visit the U.S. in 1959. Thompson helped arrange (and was present for) the 1967 summit in the U.S. between President Johnson and Premier Alexei Kosygin in Glassboro, New Jersey, after the Six-Day War in the Middle East exacerbated tensions. Also in 1967, the Soviet Union and U.S. agreed to begin cooperation in space, with the joint Soyuz-Apollo program. The first treaty on Non-Proliferation of Nuclear Weapons was signed on July 1, 1968.Thompson ended his first tour in Moscow in 1962, when President Kennedy brought him home to Washington to become his Ambassador-at-Large, as a member of the Executive Committee of the National Security Council (ExComm), advising the President on Soviet affairs. He was barely home before he was called upon to play a key role in resolving the Missile Crisis in October 1962, and to share that key role with Attorney General Robert Kennedy.  That crisis pitted the United States and the Soviet Union nose to nose, closer to nuclear war than they ever had been or ever would be. In the early evening of Friday, October 26, 1962, as war over the Missile Crisis seemed inevitable, Khrushchev sent Kennedy a conciliatory letter in which he offered to remove Soviet offensive missiles from Cuba if the United States would promise not to invade Cuba. As Kennedy was considering that letter, Khrushchev sent a much more belligerent one early the next morning, October 27.  He offered to withdraw missiles form Cuba only if the United States would withdraw similar American missiles from Turkey.Kennedy’s advisors pondered the second letter, with some arguing for military action based on it and others considering trading the missiles in Cuba for those in Turkey. Thompson argued vociferously against either course. He resisted the idea of military action, and also opposed trading away the Turkish missiles because he knew that America’s NATO allies would perceive a trade of missiles under pressure as meaning that the United States had abandoned them. Instead, he urged Kennedy not to consider the second letter as negating the first one, but to respond to Khrushchev_s first and conciliatory letter and to ignore the subsequent belligerent one. He knew that an American promise not to invade Cuba would let Khrushchev off the hook, since Khrushchev could claim strategic success in avoiding an American invasion.  Thompson correctly perceived that Khrushchev did not want war but wrote the second, bellicose letter under scrutiny from Soviet generals and hard-line members of the Politburo.  “The important thing for Khrushchev, it seems to me,” Thompson said, “is to be able to say ‘I saved Cuba; I stopped an invasion.’ And he can get away with this, if he wants to, and he’s had a go at this Turkey thing, and that we’ll discuss later.”Ultimately, Kennedy took both of Thompson’s pieces of advice: The National Security Council meeting resulted in a letter from the President accepting the terms of Khrushchev’s first (and conciliatory) letter.  Then, outside of the National Security Council, the President met secretly in the Oval Office with a small group that included Thompson, Robert F. Kennedy, and Secretary of State Dean Rusk.  He instructed Bobby to have a back-channel meeting with Soviet Ambassador Dobrynin in order to convey clandestinely to Khrushchev that, although the President could not publicly agree to remove American missiles from Turkey, the United States would dismantle those missiles in time.  Echoing Thompson_s concerns, Bobby was told to emphasize that dismantling the missiles was not a trade.  The diplomacy worked, and the Missile Crisis was over.Dean Rusk later wrote that Robert Kennedy presented the proposal that the National Security Council adopted, but it was originally Thompson_s idea. Robert Kennedy echoed the President_s respect for Thompson.  JFK, he said, “liked Tommy Thompson.  This is obviously influenced by my personal opinion, you know, and I expect it’s based on the conversations that we had.  Tommy Thompson he thought was outstanding.  I also thought he was outstanding.  He made a major difference.  The most valuable people during the Cuban crisis were Bob McNamara and Tommy Thompson, I thought.”Typed letter signed, on John Fitzgerald Kennedy Library letterhead, Washington, April 8, 1965, to Thompson, then Ambassador at Large, expressing gratitude for his helping document the Kennedy administration and its role in the Cuban Missile Crisis. “I have just learned that the oral interview which you so kindly made for the John F. Kennedy Library has been completed. I am confident that these interviews will be an invaluable part of the historical record of the years in which John Kennedy was active. I hope that you derive satisfaction for this endeavor, and I am sure that future scholars and students will be in your debt.” We have never seen this letterhead before, and this is not surprising, as the Kennedy Library had just started collecting interviews, statements and materials to be eventually housed there once the building was constructed.This letter comes from the Thompson descendants. (Inventory #: 8819)
$3,500.00 add to cart Available from Raab Collection
Share this item